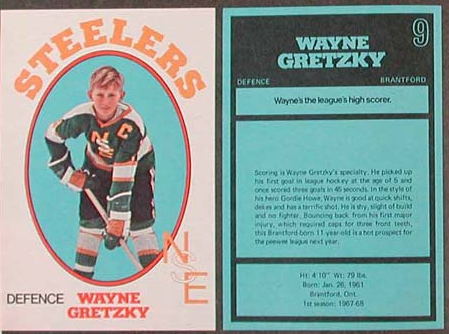 This card has Gretzky playing Defence

Card Info :
Scoring is Wayne Gretzky's specialty. He picked up his first goal in league Hockey at the age of 5 and once scored three goals in 45 seconds. In the style of his hero Gordie Howe, Wayne is good at quick shifts, dekes, and has a terrific shot. He is shy, slight of build and no fighter. Bouncing back from his first major injury, which required caps for three front teeth, the Brantford born 11 year old is a hot prospect for the peewee league next year.