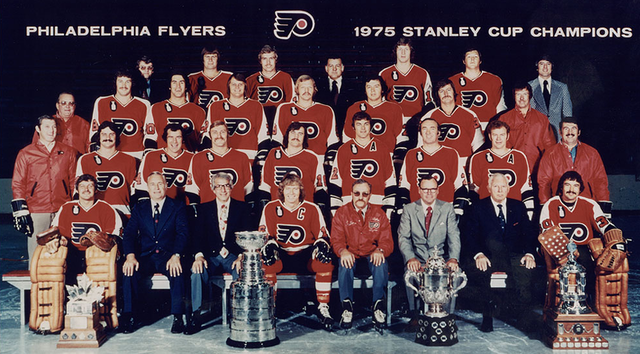 The Flyers won the series 4 games to 2. Bernie Parent was the whole ball of wax for the outgunned Flyers, allowing only 12 goals in the six games, capped with a shutout. In the deciding game six played in Buffalo, the Sabres offensive big guns rained shot after shot on Parent in an all out effort to turn the series around but Parent remained perfect. He stopped French Connection linemates Gilbert Perreault and Rick Martin on a 2-1 late in period two that had Flyers legendary broadcaster Gene Hart screaming into his microphone...

The dramatic stop by Parent took the offensive energy out of the Sabers and the Flyers scored two third period goals to take the championship.

Parent became the first player to win the Conn Smythe Trophy for two consecutive years. Since then, only Mario Lemieux has managed to duplicate this feat.

The third game of the series was the legendary Fog Game. Due to unusual heat in Buffalo in May 1975, and the lack of an air conditioning system in the auditorium, portions of the game were played in heavy fog. During stoppages of play, rink employees skated around the arena ice carrying bed sheets in an attempt to dissapate the fog. Players, officials, and the puck were invisible to many spectators. The fog began to form just minutes after another odd incident: A bat in the arena, which flew above and around the players for the majority of the game, until Sabres center Jim Lorentz killed it with his stick. Many superstitious Buffalo fans considered this to be an "Evil Omen," pertaining to the result of the series. It was the only time that any player killed an animal during an NHL game. The game continued and the Sabres won thanks to Rene Robert's goal in overtime.