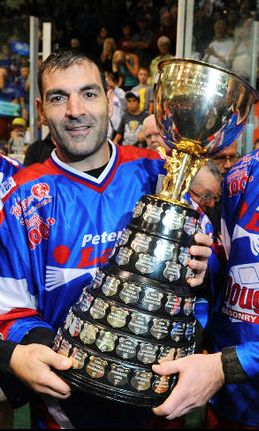 Tavares scored his 800th on a power play at the 13:49 mark of the third quarter in Buffalo Bandits 16-13 loss to Calgary Roughnecks. He had the ball to the left of Roughnecks goalie Mike Poulin, stepped towards the middle of the floor, and bounced a ball into the net from just outside the crease late in the third quarter, lifting most of the 16,606 spectators out of their First Niagara Center seats.

Tavares also amassed in excess of 1,700 points. All of his numbers are NLL career scoring records.

Tavares is 45 years old and in his 23rd season with the Bandits of the National Lacrosse League. He's originally from Toronto, Ontario.

Tavares Quote:
"I really don't care for milestones but, obviously, it's a huge achievement to score 800 in the league for the number of games (293) that I've played.