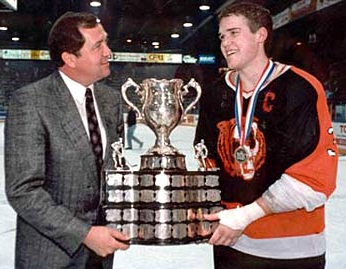 As the president of the Canadian Hockey League, one of Ed Chynoweth's duties was to present the Memorial Cup to the captain of the championship team. That season, the tournament was held in Chicoutimi, Quebec, and featured the Western Hockey League champion Medicine Hat Tigers, the Ontario Hockey League champion Windsor Spitfires, the Quebec Major Junior Hockey champion Hull Olympiques and the QMJHL runner-ups, the Drummondville Voltigeurs. That year, the Medicine Hat Tigers won a second consecutive Memorial Cup championship.

Ed Chynoweth called upon the Medicine Hat Tigers' captain to accept the trophy, and at that moment, Ed was able to hand the Memorial Cup to his son, Dean Chynoweth.