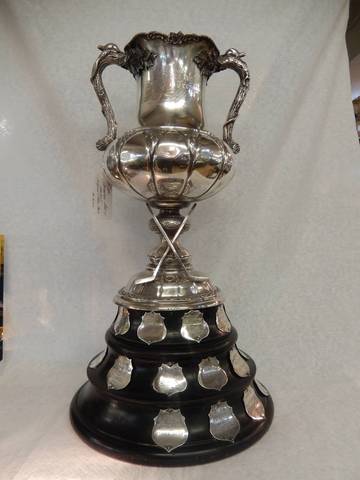 The Citizens Trophy was presented to the Windsor Hockey League by the citizens of Windsor in 1900. The trophy was won by the Windsor Avonians in 1900, 1901 and 1902. The team was allowed to keep the cup, so a new cup was donated.

The Windsor Citizen’s Hockey Trophy was first handed out in 1903 to the Resolute Hockey Team.

Engraved on the front of this trophy is :
Citizens
Hockey-Trophy
Presented by,
The Citizens of Windsor N.S.
For Annual Competition

The original trophy is in the Windsor Hockey Heritage Museum. The second cup was awarded until 1953, then it disappeared from public view. The trophy became the property of Mitchell Franklin, a well-know developer of movie theatres in the Maritimes. Mitchell was married to Mitzi Mayer, daughter of movie mogul Louis B. Mayer.

The historic trophy was discovered in an antique store in downtown Toronto, where Sean Gadon spotted it in a display in 2013. The antique dealer purchased the trophy at an estate sale about two years earlier.

Sean Gadon was instrumental in returning the trophy to its roots, and organized a fundraiser to purchase the cup for the Windsor Hockey Heritage Centre.