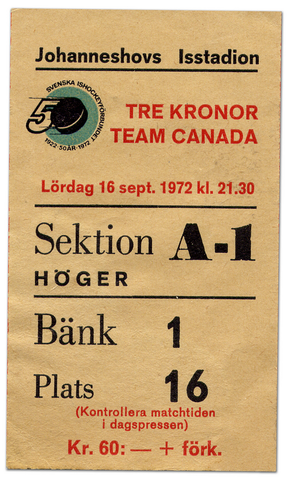 During the two-week hiatus between games four and five, the Canadians visited Sweden and played two exhibition games versus the Swedish national team. The Team Canada management had arranged for the visit to Sweden to get used to the bigger ice surfaces in Europe, and stopping in Sweden would provide some rest for Team Canada before resuming the series in Moscow. The games took place on September 16 and September 17 at the Johanneshovs Isstadion arena in Stockholm. Canada won game one 4–1; the second game was a 4–4 tie. The first exhibition game introduced Canada to the two West German referees, Josef Kompalla and Franz Baader. These two referees would figure prominently in games six and eight of the Canada-Russia Summit Series.