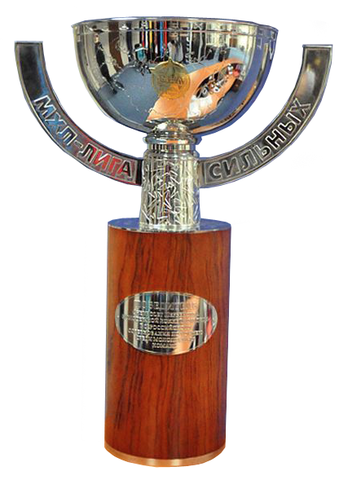 Molodezhnaya Hockey League -B
Молодежная Хоккейная Лига
The Junior Hockey League Division B is the second level of the Junior Hockey League, junior ice Hockey league. The B division was established in 2011 and the inaugural season is the 2011–12 season. A promotion and relegation system is in place between the MHL and MHL-B, where the bottom 2 teams at the end of the season of MHL are relegated to MHL-B and 2 best MHL-B teams are promoted to MHL.

The Regions' Cup is awarded to the champion of the playoffs of the league.

The trophy weighs 19 kilograms. The upper part is made of bronze and plated with nickel, and bottom - from the rare tree called Bubinga, which grows in Africa