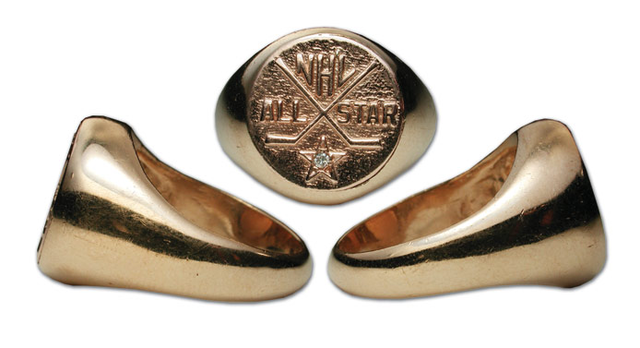 Jean Beliveau's initial selection to an NHL All-Star team. Following his rookie season of ‘53-54 in which he appeared in just 44 games because of injuries, Beliveau exploded in ‘54-55, scoring 73 points in 70 games including 37 goals. He was named to the First All-Star Team for the first of 6 times. Beliveau dominated the ensuing years as well, gaining the same nod 5 of the next 6 years. This handsome and appealing ring features a solitaire diamond set into a star, two crossed hockey sticks and "NHL All-Star" on the face. The reverse of the face carries the inscription "Jean Beliveau - 1954-5". Originally a charm that was made into a ring, it is size 10 and condition is excellent with just light wear to mention. A member of 10 NHL All-Star teams overall in his formidable career