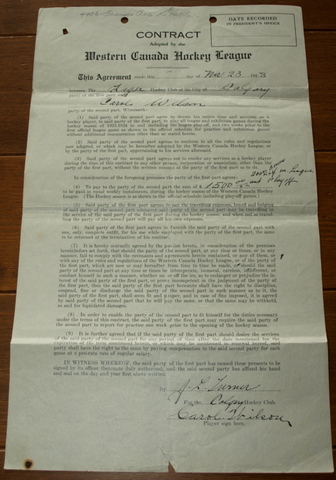 Hockey Contract from 2 time-Stanley Cup Champion Carol "Cully" Wilson, signed by Wilson and Lloyd Turner (HOF Builder). Wilson played for the Toronto St.Pats, Toronto Blueshirts, Hamilton Tigers, Seattle Metropolitans, Chicago Blackhawks and other professional teams. This is his original contract from when he played with the the Tigers in 1923/24 in the WCHL. Lloyd turner HHOF builder was the owner of the Tigers and has signed the contract along with Wilson