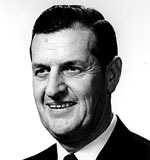 Herbert Wendell Gallagher - Born 1911 - Died 1992.
Entered Northeastern University in 1929. He became one of the first Northeastern undergraduates to win letters in three varsity sports. Upon graduation in 1935, he had earned nine letters in baseball, Hockey and soccer. He was captain of the 1934 Hockey team and was also an outstanding baseball player for Northeastern, excelling both as a pitcher and a batter. He was an All New England selection in Hockey and baseball in 1934.

Gallagher was coach of the Austrian national Hockey team in the 1936 Olympic Games in Garmisch, Germany. He then returned to Northeastern in 1937 to become a professor of physical education, coach of the varsity Hockey and freshman baseball teams, and backfield coach of the football squad. In all, Herb Gallagher served Northeastern University for 60 years as player, coach (1937-1952) and athletics director (1953-1977). In 1948 he was named New England Hockey Coach of the Year. He was one of the founders of the Beanpot tournament, originating the concept of a “Boston Hockey Invitational” along with Boston Garden President Walter Brown. The annual Hockey tournament that featues Boston College, Boston University, Harvard and Northeastern. It all started on Dec. 26, 1952 at the old Boston Arena. The next year the Beanpot moved to the Garden, where it has been played ever since and become the official battle for Boston's Hockey bragging rights. Gallagher coached NU in the first three Beanpots. During his tenure as athletic director, he guided Northeastern from a university that competed in the College Division to a New England force in collegiate athletics. He is a member of the College Hockey and Northeastern Halls of Fame.

In 1991 Herb Gallagher was the recipient of the John “Snooks” Kelley Founders Award, honoring those people in the coaching profession who have contributed to the overall growth and development of the sport of ice Hockey in the United States. In 2006 he was posthumously awarded the ECAC’s James Lynah Distinguished Achievement Award, bestowed annually to a maximum of four former ECAC athletic administrators who have achieved outstanding success in their career and have made an unusual contribution in the interest of intercollegiate athletics, the NCAA and the ECAC. An award in his own name, the Herb Gallagher Award, is given annually for the best forward in New England Hockey.