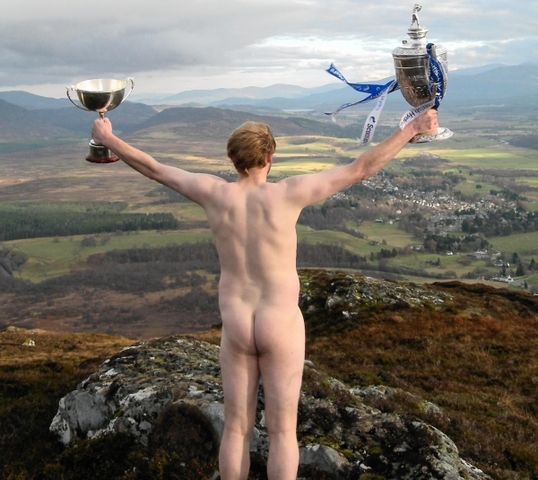 Newtonmore shinty player Paul MacArthur (29), son of manager Norman, posed in the all together after he and his pals celebrated a Premier Division and Camanachd Cup double on Sunday by climbing Creag Dubh, the steep mountain overlooking the village of Newtonmore, which includes a famous rock climber’s crag.
They were still buzzing after coming from behind to snatch the league title through a last gasp injury time winner which defeated Kyles Athletic 2-1 at Dunoon on Saturday and gave the Blue and Whites their second successive title.
Paul said: "It wasn’t planned. When we got to the top of the mountain and we were having our pictures taken I said I would prefer a slightly different one and the lads convinced me to strip off!
"It was all a bit of a laugh and it has caused a bit of stir. I will never forget it, though I don’t know if I will do it again!"

"Climbing Creag Dhu after winning a trophy is becoming a bit of a tradition for the team and hopefully it will continue – but I will be keeping my clothes on in future!"