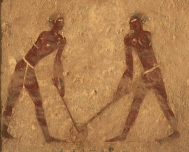 The tomb of Kheti is dedicated to the son of Baqet. The wall paintings here are most interesting in the respect that they show everyday scenes from the Middle Kingdom, with harvests of wine grapes and papyrus, as well as pleasures of music and dancing. Khety and his wife are shown presiding over the activities and watch women dancing and playing sports. The ceiling is erected on lotus -shaped columns.