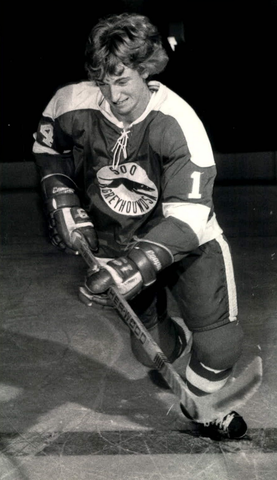 In 1977, the Sault Ste.Marie Greyhounds picked a 16 year old Wayne Gretzky, standing at 5 ft 8 in (173 cm) and weighing 155 pounds (70 kg), with the third pick in the Ontario Midget Draft. He was still small in stature, but would have a big impact on the game.
Gretzky requested to wear # 9 for his idol Gordie Howe, but that number was already taken by linemate Brian Gualazzi. Gretzky then chose # 19 instead. After a few games, coach Muzz MacPherson suggested wearing two nines would be better than one. From that season on, Gretzky has always worn the legendary # 99 - In 63 games that year, he set the Greyhounds all-time record, scoring 70 goals and had 112 assists for a total of 182 points. Gretzky would have won the scoring title, except for a 192 point season by Bobby Smith. Gretzky was awarded the Emms Family Award as the rookie of the year, and the William Hanley Trophy as most gentlemanly player - Gretzky is wearing the # 14 jersey here, which would indicate that this photo was taken early in the season, possibly training camp.