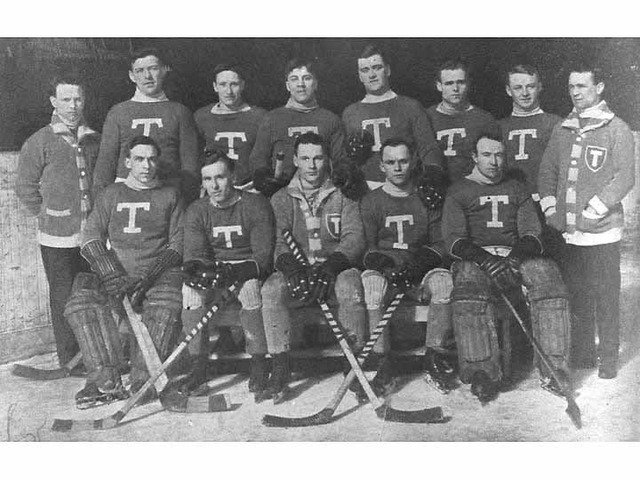 At the end of the 1914 regular season, a tie for first place necessitated a playoff to determine the championship. Tied at the top of the standings, the Toronto Hockey Club and the Montreal Canadiens faced off in a two game, total goals series to determine a league champion. The first game was played at Westmount Arena in Montreal on March 7, 1914, with the home team Canadiens shutting out the Toronto Hockey Club 2 to 0. The next game was at the Arena Gardens in Toronto on March 11, 1914 This was the 1st Stanley Cup game played on artificial ice, with the home team winning again, this time Toronto shutting out the Canadiens 6 to 0, and winning the Stanley Cup based on a total goals scored series 6 to 2. The only challenge played for the Stanley Cup was from the Victoria Aristocrats of the Pacific Coast Hockey Association - PCHA. This was the 1st challenge accepted by the Stanley Cup trustees by a team from the Pacific Coast of Canada. The Victoria team traveled to Toronto to play a 3 game series vs the Toronto Hockey Club. The 1st & 3rd game played by NHA rules, and the 2nd game played by PCHA rules. Toronto won the 1st game on March 14, 1914 with a score of 5 to 2. The 2nd game played on March 17, 1914, under PCHA rules went into the 1st overtime game, with Toronto winning 6 to 5. The 3rd game was played on March 19, 1914, and again Toronto winning 2 to 1. All 3 games played at Arena Gardens.