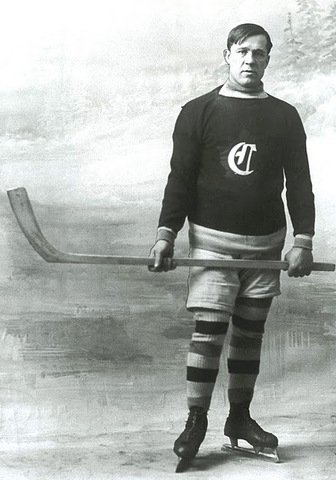 Joseph George Didier "Cannonball" Pitre (1 September 1883— 29 July 1934) was a Canadian Professional Ice Hockey player. He was nicked named "Cannonball". One of the first players to join the Montreal Canadiens, Pitre's French-Canadian heritage helped give his line-mates the nickname the Flying Frenchmen, brought upon by his exceptional speed. As well as playing for the Canadiens, Pitre played for several other teams in various leagues such as the International Professional Hockey League, the first professional hockey league, and the Pacific Coast Hockey Association. A prolific scorer, Pitre helped the Canadiens win the Stanley Cup for the first time in 1916.

Didier Pitre's first major Hockey league was the International Professional Hockey League, playing with the Michigan Soo Indians, who played in Sault Ste. Marie, Michigan. He joined the Soo team in 1904. By 1905/06, he was the already the top scorer in the league scoring 41 goals in 22 games played. Pitre was on the IHL all-star first team that year in 1906 and again in 1907.

He joined the Montreal Canadiens in 1909. He stayed for four years, before leaving for the west again. He spent a year playing with the Vancouver Millionaires. Pitre returned to Montreal the next year. In 1916, Pitre led the National Hockey Association in regular season assists and points. He scored 24 goals, 15 assists (assists in those days were one per goal and only if the official scorer thought it contributed to the goal being scored) for 39 points. He also helped lead the Canadiens to their first ever Stanley Cup. He led the playoffs in goals as well. In the 1919 Stanley Cup playoffs, which were never completed due to the influenza epidemic, he led the playoffs in points. By 1921, the Canadiens had so much depth at forward, and an opening on defence due to the death of future Hall of Famer Joe Hall in the influenza epidemic, so they decided to try Pitre as a defenceman; not as difficult a transition as one might think, because he had previously been a "Rover" during the days of "seven man" Hockey. He remained with Montreal through the formation of the NHL and into 1923.

Pitre was inducted into the Hockey Hall of Fame in 1962.