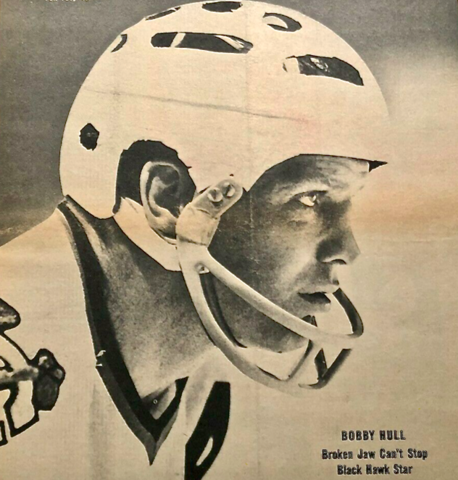 Bobby Hull had his jaw broken on Christmas day, 1968 when he was hit by the elbow from Toronto Maple Leafs Mike Pelyk flush in the mouth.

He missed one game, then played six weeks with his jaw wired shut, sipping a "brownish ugh" (3/4 of a pound of ground beef, a cup of half-and-half, a can of barley soup and 1/2 a cup of milk) for nourishment through a straw. Hull scored 10 goals while losing weight during those 6 weeks.

This image is from the cover of The Sporting News, February 8, 1969.

Looks like Hull is using a football helmet / makeshift helmet and a football face guard. The helmet has been crudely cut for ears and vents on top.