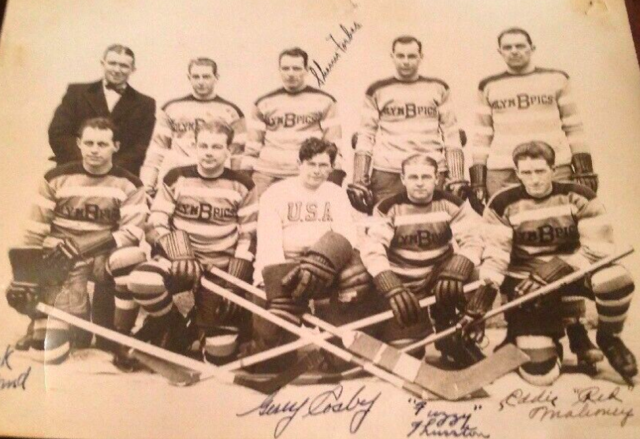 Walter A. Brown also managed the Boston Olympic Hockey Club. The full U.S. A. team (Boston Olympics) was to take a four-month tour of Europe that would include playing in the 1933 World Ice Hockey championships held in Prague, Czechoslovakia from February 18-26, 1933. Just prior to leaving for Europe, Brown learned that the Amateur Athletic Union / A.A.U. was not happy with the team name (Boston Olympics) due to there being two New Yorkers on the team. The name was changed to the Rangers. While playing overseas the European newspaper writers added the Massachusetts.

The Massachusetts Rangers began play in the World Championships on February 21 with a 7-0 win over Switzerland. They then followed up with three more consecutive shutouts over Poland 4-0, Czechoslovakia 6-0 and Austria 4-0, setting the stage for a matchup with the Toronto National Sea Fleas representing Canada and coached by Harold Ballard, future owner of the Toronto Maple Leafs, in the finals. The game took place on February 26, the Massachusetts Rangers would pull out a 2-1 overtime victory. This was the first, and so far, only World Hockey Championship the United States has won. It also marked the first time the U.S. had defeated Canada in International competition. In five games played during the World Championships, Cosby had the 4 shutouts and only allowed 1 goal in the tournament. The team toured Europe for 6 more weeks, playing in Czechoslovakia, Austria, France, England, Germany, Bavaria, Italy, Hungary and Switzerland.