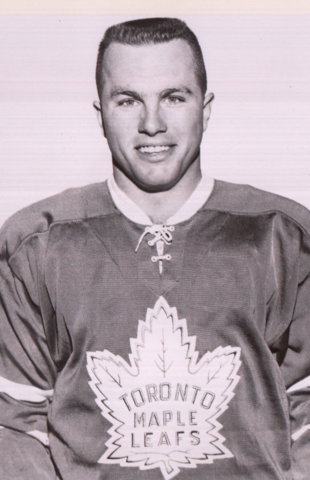 Ellis played junior Hockey with the fabled Toronto Marlboros. He was a prolific scorer in junior and starred when the Marlies won the Memorial Cup in 1964, scoring 2 goals in the first game of best of seven. Ellis scored 159 points, including 86 goals, in 126 regular season games and another 43 points in 31 playoff games for the Marlies between 1961-64.

Ellis became a full-time Maple Leaf in 1964–65 season, and impressed coaches and fans in his first NHL season by scoring 23 goals and narrowly losing the Calder Memorial Trophy race to Detroit netminder Roger Crozier. He was immediately a vital two-way performer playing on a line with stalwarts Dave Keon and Bob Pulford. The veterans were impressed with the fact that the youngster's zeal was as strong while checking as it was when racing in on the opposition's goal.

Ellis scored 19 goals as a sophomore and 22 goals in his third year (1966-67), and was one of the youthful troops that supported such legendary oldtimers as Red Kelly, Johnny Bower, Terry Sawchuk and George Armstrong. This gritty squad overcame a mediocre regular season to win the Stanley Cup. Ellis provided the crucial first goal in the sixth game of the finals versus Montreal, which the team won 3-1 to take the series in six games, and the 1967 Stanley Cup championship.

This didn't slow down Ellis, who got 28 goals in 1967-68 despite playing most of the season with a broken wrist. Bone graft surgery corrected that damage and Ron went on to score 25 goals the following season. By this time he was a well established NHL'er. Up to this point Ron had worn No.8 on his jersey, the same number as he used to have in the juniors. During the 1968-69 season the legendary Irwin 'Ace' Bailey, who was a penalty-box timekeeper at the MLG, came to Ron and requested he wear No. 6.

The No. 6 had been retired by the Maple Leafs. It originally belonged to Bailey who wore it until his fatal accident in 1933 when Eddie Shore ended his career by a vicious check that left Bailey with a fractured skull. The number remained a source of pride to Ron because of the fact that Bailey himself approached him with the request to wear it.

"Wearing No. 6 was my greatest honor ever as a Maple Leaf. Ace Bailey personally asked me if I would consider wearing his number. He had followed me for a few years and considered our styles of play comparable," Ron said.

There was one provision, however. Bailey told Ron that once he retired, the number would go back into retirement. Which it did twice.

In 1969-70 Ron scored a career high 35 goals and was one of the best right wingers in the league. He formed a very dangerous line together with Norm Ullman and Paul Henderson, both acquired in the big Frank Mahovlich trade. He followed up the 69-70 season with 24 and 23 goals. His consistency was remarkable.

Boston Bruins general manager Harry Sinden was another Ellis admirer. He was the impetus behind the Toronto winger's invitation to training camp when Team Canada 1972 was being assembled prior to the Summit Series against the Soviet National Team. Despite a serious neck injury suffered in the opening game, Ellis played a strong checking role in all eight games of the series., and he did it very well, while also picking up 3 assists. He played mostly on a line together with Bobby Clarke and Paul Henderson. Around the NHL Ron had picked up the tag from rival players as the hardest working two-way forward in the league.

Ron scored 22 goals in 1972-73 and 23 in 19 73-74. Then in 1974-75 Ron scored 32 goals and a career high 61 points. At this point of his career he was playing the best Hockey of his career. Suddenly he decided to retire from Hockey. He said he no longer had the desire to play and denied that his decision had anything to do with being passed over as team captain in favour of Darryl Sittler a month earlier. But when I retired, I always left the door open to return."

When Ellis first heard the news that Canadian professionals were eligible for the 1977 World Championship in Vienna, he volunteered his services as a consultant. It turned out that he was asked to try out for the team. He had kept in shape by playing oldtimers Hockey after his retirement. Ron was proud of the invitation and he was even more proud by the fact that he was Canada's top forward in the tournament. He scored 5 goals and 9 points in 10 games. Canada finished fourth.

"It was a pleasant surprise for me. I think I played some of the best Hockey in Austria that I have played in my entire career," Ron said.

"Roger Neilson's style of play is the way I've played all my life. I've always been a two-way player. I think that's what has kept me in the league and I'm not going to change my style of play now. I believe in what Roger is trying to do. I've talked to some of the players and there was a tremendous feeling about the team at training camp," Ron said.

Ellis had a great comeback season, scoring 26 goals, 24 assists in 80 games, and was one of Toronto's most consistent players. With that performance he passed George Armstrong's club record for most career goals by a right wing. He also set a club record with his 10th consecutive season with 20 goals or more, and helped the team reach the Stanley Cup semifinals for the first time since winning it all in 1967.

The following year he lost 17 games to injury and the team began to disintegrate because of the destructive antics of owner Harold Ballard. Punch Imlach was hired to run the Maple Leafs for the 1979–80 season and didn't feel that Ellis was worth the money he was being paid. He offered to buy out Ellis's contract at the end of the season, but the two couldn't reach an agreement. Despite objections from new coach Mike Nykoluk, Imlach put Ellis on waivers during the 1980–81 season and gave him an ultimatum: retire or be sent to the minor leagues. One of the most distasteful incidents in the mismanagement of the Toronto team during this period occurred when Ellis arrived at Maple Leaf Gardens to find that his equipment was locked away and that his services were no longer needed.

The 36-year-old Ellis chose to retire. He had played 1,034 career NHL games, was the highest scoring right wing in Maple Leafs history scoring 332 goals and 308 assists for 640 points.

Following his retirement, Ellis continued to work in the business world and eventually returned to the game under the auspices of the Hockey Hall of Fame in 1992. His ability in public relations and involvement with the Hall's educational outreach programs have proven invaluable.

The stresses of life after Hockey took its toll. In 1986 a bout with clinical depression began. He would later go public with his story by writing a book with Kevin Shea titled Over The Boards: The Ron Ellis Story, published in 2002. Today, he is a speaker on the importance of diagnosing and treating clinical depression.

Ron Ellis was inducted into the Ontario Sports Hall of Fame in 2016.