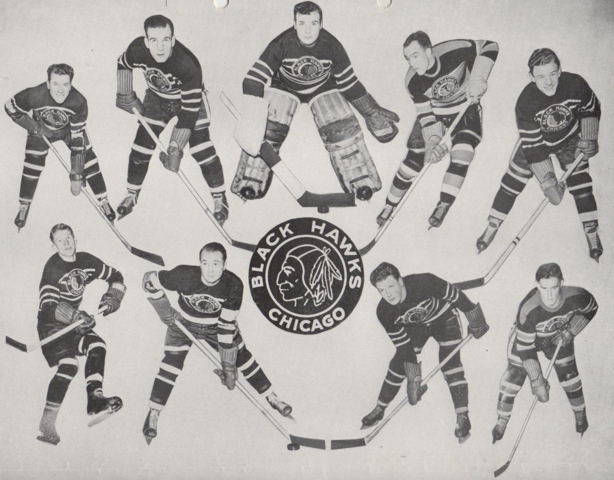 During the Second World War, many National Hockey League players put their careers on hold to serve in the military.

Other players enlisted but did not make it to the front lines. Having them play Hockey either in Canada or in military camps overseas proved to be a pillar of strength for both civilians and the military. Highly competitive regimental Hockey teams were formed, serving such purposes as keeping the men fit and entertaining the serving members on military bases.

While firm numbers are elusive, hundreds of Canadian, American and European Hockey players from all leagues would end up serving during the Second World War and sadly, more than 50 would not survive.

Here is a list of Chicago Black Hawk players.

- Alex Kaleta registered 28 points as a rookie with the Black Hawks in 1941-42 then spent three seasons playing with the Calgary Currie Army during the War, returning back to Chicago for the 1945-46 season.

- John Mariucci during World War II served in the United States Coast Guard. He also continued to play Hockey as defenseman on the service's team, the Coast Guard Cutters, from 1942 to 1944.

- Sam LoPresti joined the Navy's armed guard service and served aboard the SS Roger B. Taney as a gunner's mate, assigned to duty protecting ships as they crossed the Atlantic Ocean. The ship was torpedoed and sunk during an Atlantic crossing in February 1943. Listed as missing in action, LoPresti was thought to be the first casualty among American professional athletes in the conflict. As the Roger B. Taney sank, LoPresti and the other Naval Armed Guards abandoned the ship on rafts, which were picked up the next morning by the lifeboats. He was one of 26 men who took refuge in the number 4 lifeboat with minimal water or food supplies. The lifeboat was sailed to the South American coast in a voyage of 42 days, traveling nearly 2,500 miles (4,000 km) southwest, before they were found and rescued off the coast of Brazil. They had collected rain water when they could, at times drinking only 4 imperial fluid ounces (110 mL) per day and had only a small amount of biscuits and bakers chocolate for food. LoPresti was credited with saving the men's lives by catching the only real food they had during their entire ordeal after noticing dolphins swimming around their boat on one occasion. According to another sailor, LoPresti improvised a weapon by lashing a sheath knife to a boat hook. He plunged into the ocean, catching a 35-pound (16 kg) dolphin. They hauled it into the boat, drank its blood, and cooked the meat in a metal bucket with rags and kerosene.

- Joe Cooper World War II interrupted his career in 1942, but he found time to play 12 regular season games with the Ottawa Commandos of the Quebec Senior Hockey League. The Commandos advanced to the Allan Cup final against the Victoria Army team from British Columbia, who they defeated 3 games to 1 to win the 1943 Allan Cup championship. Cooper scored 4 goals and 6 assists during the 12 game playoff run.

- Bill Mosienko The Blackhawks first recalled Mosienko in 1942, replacing players who had left to fight World War II. He scored his first three NHL goals on February 9, 1942, 21 seconds apart. Exempted from military service for medical reasons likely related to his small size, Mosienko was unable to cross into the United States as a result of travel restrictions and played the 1942–43 season primarily with the Quebec Aces of the Quebec Senior Hockey League. He appeared in two games when the Hawks traveled to Toronto. He finally established himself as an NHL regular in 1943–44 and scored a career high 70 points.

- Leo Carbol's cup of coffee in the NHL was short and sweet. He played in just six games and picked up 1 assist before he, too, was summoned by the war. He proudly served as a sergeant with the US Army's Air Corps.

- Bill Carse had a three year run with the Black Hawks. After 122 games, 28 goals and 71 points, World War II interceded in his career path as well. In 1942-43 he returned to Canada to play for the Victoria Army team that lost the 1942-43 Allan Cup Final. After World War II Carse played with the Vancouver Canucks in the Pacific Coast Hockey League until he retired in 1951.

- Dave MacKay The Black Hawks summoned MacKay to the NHL during the 1940-41 season, and in 29 games, 'Red' scored three goals and added 26 penalty minutes. These would be the only NHL statistics attached to his name. The Alberta Military Authority rejected MacKay's request to return to Chicago for the 1941-42 season, so he signed as a free agent with the Nanaimo Clippers of the Pacific Coast Hockey League, while also playing with the Nanaimo Army Hockey Team and the Vancouver Army Hockey Team.

- John Chad signed a free-agent contract with the Chicago Blackhawks on October 18, 1939, and suited up for 22 games for them that year, scoring eight goals and eleven points. He also managed to play 31 games the Providence Reds of the IAHL, collecting 22 points in 31 contests.

The 1940-41 season saw Chad dress for 45 games with the Blackhawks. He scored seven goals and 25 points, tying Cully Dalstrom for fourth in team scoring. Despite his success in Chicago, Chad headed back to Canada where he played with the Regina Rangers of the SSHL in 1941-42. Two of the next three years were spent with the Calgary RCAF, with a year playing for the Calgary Combines sandwiched in between.