The McIntyre Building hosted the Toronto Maple Leafs in 1938 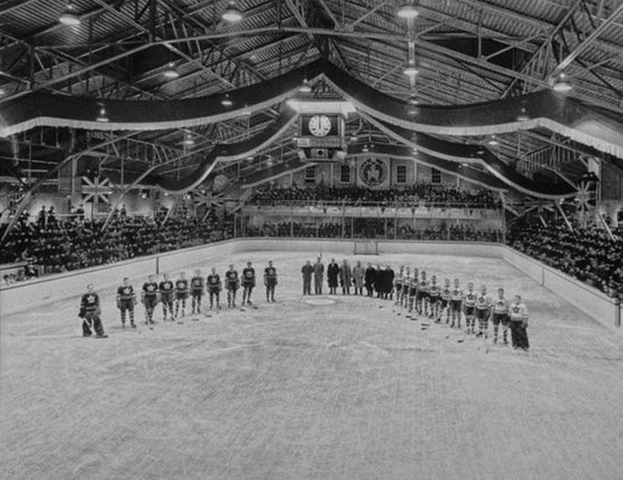 The McIntyre Building in Timmons, Ontario hosted the Toronto Maple Leafs Blue and White game in 1938.

The McIntyre Community Center, built in 1938 by the McIntyre Mine for the residents of the mining town of Schumacher. At the time of construction, this building was a recreation facility ahead of its time as it housed not only an arena but also a curling rink, ballroom, auditorium, bowling alley, coffee shop and meeting rooms. The building is still very active and features in-house catering services for events from 500-1000 people. The McIntyre Arena is a scale model of Maple Leaf Gardens, complete with the famous red, green and blue seats and end balconies. It was the McIntyre Mine manager, J.P. Bickell who arranged for Conn Smythe to acquire the steel for Maple Leaf Gardens prior to World War II, at a time when steel was scarce. To honour Mr. Bickell, the Toronto Maple Leafs named the J.P. Bickell Memorial Trophy after him. Once Maple Leaf Gardens was completed, Mr. Bickell arranged for the construction of the McIntyre Community building. Throughout its days the McIntyre has hosted Provincial, National and International events ranging from hockey, figure skating, curling, conventions, concerts, exhibitions and shows. All categories of hockey have been played at the McIntyre from the glory days of Senior Hockey through Intermediate, Junior and Minor Hockey. In fact, the Toronto Maple Leafs has used it for their training camp. The McIntyre can comfortably accommodate over 2000 spectators with the record attendance being 3500.