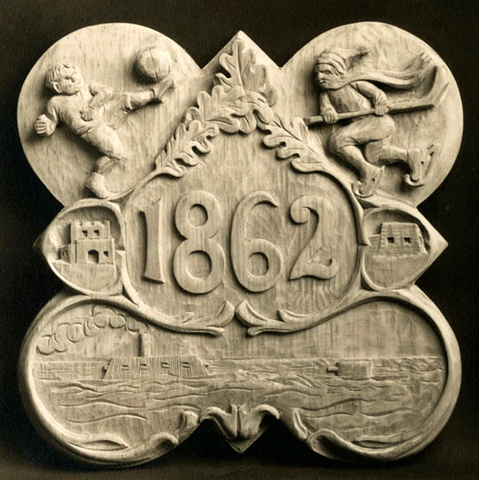 This photo is of the Form plaque carving for 1862 on display in the Coit Upper Dining Hall that was completed by woodcarver John Gregory Wiggins sometime between November of 1922 and May of 1923.

The following description of the design was written by Wiggins in the June 7, 1923 edition of the Horae Scholasticae:
The lower half of the shield shows the famous encounter between the Monitor and the Merrimac. In the corners are forts, suggesting the taking of Forts Henry and Donelson. In the top center is a bunch of oak leaves – the Battle of Fair Oaks. In the upper left is foot-ball, which was played quite a bit that fall; and upper right shows “Shinny on the ice,” the first sign of life in “The Cradle of Hockey.”