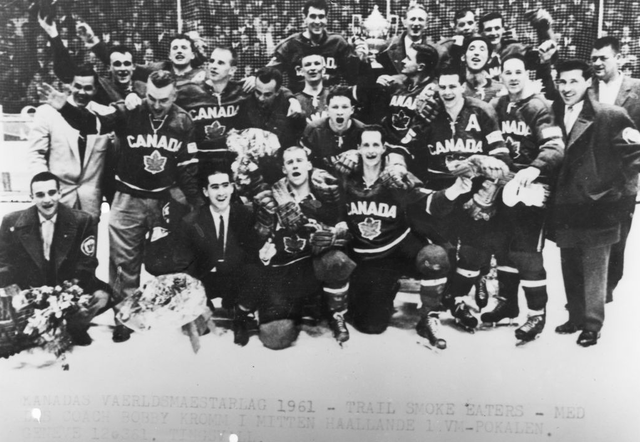 Canada's Trail Smoke Eaters were making a stand as amateur Hockey players against a Soviet system that was decidedly professional - army men recruited from all of its republics against Canadian farm boys, factory workers and firemen. The 1961 World Hockey Championship in Geneva, Switzerland, would come to be a touchstone of Canadian Hockey. There have been other Olympics and other world championships, but the Smokies are an enduring icon.

There's the saying, "If you want the best, send the west." How true this statement was back in 1960-61 when the Canadian Amateur Hockey Association named the Trail Smoke Eaters to represent Canada at the World Hockey Championship in Switzerland. The Smoke Eaters were the runners-up to the champion Chatham Maroons for the Allan Cup in 1959-60. Chatham defeated Trail in five games, but turned down the offer to participate in the World Championship, in favour of an earlier tour of Russia that year. It turned out to be a disastrous trip for the Maroons, who won one one game and tied one, while losing five in their seven game series behind the Iron Curtain. The Maroons upon their return to Canada made the statement that the Smoke Eaters would have to be fifty percent stronger than the previous year, to defeat the Russians. One thing the Maroons forgot was that Trail had a firey coach in Bobby Kromm, and a crew of determined hockey players who never game up.

The CAHA ordered the Smoke Eaters to strengthen their roster with five players--and Kromm went out and picked up five of the best players in Canada. His first move was to Penticton, where he hired Walt Peacosh--who was the hottest player in the Okanagan League. Next came Jackie McLeod, a recent reinstated pro from Swift Current. Darryl Sly from Galt's Terriers, was added to the list--and many fans will remember him as coach of the Barrie Flyers in the Allan Cup finals last year. Claude Cyr, a 21 year old goaltender from the Montreal Royals, was selected as back up to regular goalie Seth Martin. Mike Legace, from Quebec City, joined the club at a later date. Earlier in the season (actually in the summer--Charlie) the Smoke Eaters had picked up Dave Rusnell from the Yorkton Terriers, who had previous overseas experience in the English League.

The Smoke Eaters knew they had a big job facing them, for the last British Columbia team to win the World Championship was the fabulous Penticton V's in 1955. Kromm said, "We will show the fans that a true amateur club can win, and we don't need to be paid high wages to do so."

With this spirit apparent in the team's attitude, the entire City of Trail, and surrounding centres, pitched in to help raise the $23,000 needed to make the trip. Students in Trail staged blitz campaigns for funds: businesses were persuaded to pay full salaries to the players' families while the team was away. Trail raised over $14,000 of the amount, with many other Kootenay cities kicking in--especially the City of Nelson--and the Maple Leafs were having their own money problems that year.

Top Shape Kromm, who emphasised conditioning, had his team in excellent shape, playing a total of 36 ames in British Columbia, before starting their long journey. They won 32 games while losing four; with Nelson giving them the most trouble. The Smoke Eaters played only two exhibition games out of the province, before flying out of Montreal on January 31. The Smoke Eaters defeated the Moose Jaw Pla-Mors 4-1, before 3,300 fans--with future Dynamiter star Bill Steenson a stand out for Moose Jaw. Next, they trounced the Yorkton Terriers 14-1, with 2,125 fans giving the smooth skating Trail team a rousing send off. The Smoke Eaters realised the sum of $2,850 for their two prairie encounters.

Landed In Norway The Smoke Eaters landed at Oslo, Norway, and opened an 18 game exhibition tour, with a 8-3 victory over the Norwegian National team--but lost the services of playing-coach Bobby Kromm, who suffered a broken nose. The Smoke Eaters moved on to Stockholm, Sweden and lost a 4-0 verdict to the Swedish National team. Kromm didn't press the panic button, despite the poor press reports. Trail got revenge by knocking over the Swedes 4-1 before 13,000 sad fans. The Smokies managed to win three out of their four games in Sweden.

It was on to Finland for one game, with the Smoke Eaters winning 10-5 over the Finnish National team, before 12,000 fans, who cheered the Trail team for their smooth passing and end-to-end rushes.

The Smoke Eaters invaded Moscow for a three game series that drew capacity crowds of 17,000 for each contest. The first game finished in a 3-3 deadlock, with the Russians taking the second fixture 3-2--but only to have Trail come fighting back to conquer the third game, 4-1.

The Smoke Eaters were red hot in Czechoslovakia, winning all five of their games, before sellout crowds of over 16,000 fans. The Smoke Eaters rounded out their exhibition swing with easy wins in Germany and Italy. Trail won a total of 15 games, lost two, and tied one--and outscored their opposition 104 goals to 47.

Finals The World Championship finals were played in Switzerland, from March 2 to 12, with the Russians rated strong favourites to win. The experts were wrong, with Canada and the Czechs finishing in a tie for top honours, with each having a record of six wins and one tie--with Trail declared champions, having a better "goals for and goals against" record than the Czechs. Canada scored a total of 45 goals and allowed eleven, with the Czechs picking up 33 goals and had nine scored against them.

Trail met Sweden in their opening game and won easily, by a 6-1 score. Next they defeated West Germany 9-1, and then took the American squad out, 7-4. Canada had their hands full in defeating East Germany 5-2, with all the scoring coming in the final period. The Czechs defeated Russia 6-4 in the biggest upset of the finals, and it set the scene for the important game between Canada and the Czechs. The game ended in a 1-1 tie, with the Czechs going ahead in the first period. Hugh "Pinoke" McIntyre played the hero role for Canada by taking a pass from Jackie McLeod and scoring the equalizer late in the second period. Seth Martin was a standout in the net for Canada, with the Smoke Eaters playing short handed most of the game.

Trail then made short order of Finland 12-1, and now faced Russia in their final game. A sellout of over 12,500 fans were happy indeed, when the Smoke Eaters blasted the Russians 5-1. Jackie McLeod paced the club with two goals, with singletons going to Harry Smith, Harold Jones and Norm Lenardon. The game was such a close checking contest, that Seth Martin was called on to make only twelve saves, and Tchinov in the Russian net, nine. Russian coach Chernyshev later said Trail was a great team, and their win was absolutely deserved.

Seth Martin was picked the outstanding netminder in the tournament. Jackie McLeod was the Smoke Eaters' leading point getter in the series, with 12 points, followed closely by Harold Jones with 11, and Dave Rusnell with ten. One unique note of the finals was that Walt Peacosh was Trail's bad boy in the penalty parade with sixteen minutes, followed by Don Fletcher, with nine minutes.

Home Welcoming Never in the history of the Kootenays has such a crowd turned out to welcome home their heros, and the last team to ever win a World Amateur Championship for Canada. Over 5,000 people greeted the team at the Castlegar Airport, and an estimated crowd of 20,000 fans jammed the streets of Trail to serenade the team.

Mayor Les Read, in welcoming home the players, said it was a wonderful day for Trail, and all of Canada.