Ball Hockey is a team sport and a variation of the sports of ice Hockey and street Hockey, where the game is played on foot in which players use sticks to direct a ball into their opposing team's net. When that occurs it is referred to as a "goal". At the end of the time allotted for the game the team with the highest number of goals is declared the winner.

In some places, mainly in the United States, ball Hockey is also called "dek Hockey", though organized ball hockey and dek Hockey leagues do have slightly different rules and play on different sized official rinks. Patterned after and closely related to ice Hockey, the sport replaces a puck with a comparatively sized ball and is played on a dry floor instead of ice.

The official governing body of the sport is the International Street and Ball Hockey Federation (ISBHF), which operates out of the Czech Republic and Canada. The federation consists of 39 countries and recognizes hundreds of thousands of players playing in organized leagues throughout the world.

In a common and unorganized pickup form, ball Hockey is most commonly played on an outdoor surface (very often a street, parking lot, or other asphalt surface). In more organized forms, it is played in rinks, both outdoors and indoors, which often were designed for roller hockey. There are also rinks built specifically for hockey played on foot, and these are referred to as dek or ball hockey rinks.

Equipment: At the highest levels of ball Hockey, players wear shin guards/pads that one would normally associate with soccer, though specific guards for the sport of ball hockey have been developed and are manufactured and sold to ball hockey players. Most male players also wear an athletic cup for groin and genitalia region protection. Players do not wear shoulder pads, but sometimes wear forearm protection. Players most importantly wear a CSA approved helmet for head protection and gloves. Each player uses a standard ice hockey stick.

The Ball: At the highest levels of ball Hockey, teams use a hard, orange, small, round, and smooth orange/reddish ball 3 inches in diameter. This allows for players to make the ball curve by over/under exaggerating a windup and follow through on their shots. Several ball manufacturers now market the balls with the temperature range the ball was designed for on the packaging itself. Although there is no certified industry standard for the balls since no street hockey standards organization exists, all hockey ball manufacturers sell their balls according to the following temperature range: red/orange = hot/warm above 60 degrees (15 C), pink = cool - between 40-60 degrees (4.5-15 C)yellow = cold - below 40 degrees (4.5 C)

Goalie Equipment: At the highest levels of ball Hockey, goalies use almost the same equipment as ice hockey goalies, however, similar to road hockey, goalies wear running shoes, or steel toed runners, and sometimes do not wear neck guards, as the neck protector attached to the helmet provides sufficient protection.

The game in its simplest forms can be played virtually anywhere that there is a flat and smooth surface, preferably with some barriers on the perimeter to prevent the ball from easily leaving the playing area. Nations without easy access to hockey arenas often construct their own outdoors, or use tennis courts, vacant parking lots, school yards, or gymnasiums. 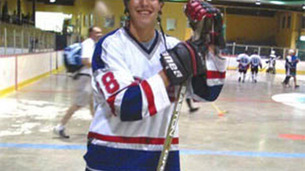 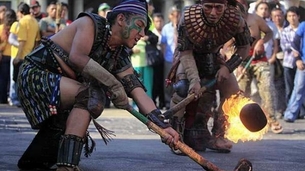 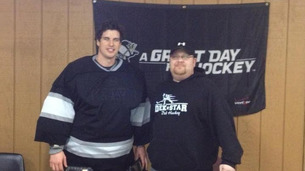 Ball Hockey is a relatively young sport with a very short modern history, but its roots can be traced back to similar games played with a ball and stick.

Ancient Greece were playing a form of ball Hockey, circa 500 BC The first documented history of such a game, called Hurling, dates back to the second millennium BC when it was played in Ireland.

Similar games were also played by the Native Indians in North America, firstly observed in 1572.

The development of ball and street Hockey has closely followed that of Ice Hockey, as it has spread around the world in the northern (colder) climates.

Formally organized street or ball Hockey leagues, in its modern form, grew independently in several countries, Canada (late 1960s), the USA (early 1970s), Austria, Czechia, and Slovakia (1980s), Finland, Germany, Japan, and Switzerland (early 1990s), and more recently in other countries. Due to its close relationship with Ice Hockey, street and ball hockey developed with similar rules throughout these countries. After the political changes in Central and Eastern Europe in 1989, international exchanges flourished, and included cross-Atlantic competitions as early as 1991, leading to the establishment of the International Street & Ball Hockey Federation in 1993, and the bi-annual World Junior and Senior Championships. The people playing the game number in the millions, with hundreds of thousands playing in organized leagues. The first international tournament occurred in 1994 in Oshawa, Canada, followed by Bratislava, Slovakia's hosting of the inaugural European Championship in 1995, and opening World Championship in June of 1996. The first World Junior Championship, for players Under-20, was held in Kralupy, Czech Republic in 2000. After staggered staging of WC's in 1996, 1998, and 1999, they settled into a bi-annual routine on odd numbered years, with the WJC's played on even numbered years.