Bubble Hockey, Dome Hockey or Rod Hockey because of the long rods used to control the players and the distinctive dome or "bubble" covering the playing field. The game can be played by two opposing players who control all five hockey players and the goalie for their side (singles) or as a two on two game (doubles). Players control their five skaters with long rods that move in and out to bring skaters up and down the ice and spin 360 degrees. A knob is used to move the goalie from side to side. Each player also a "boo button" to simulate sounds from the crowd.

The Chexx bubble Hockey game became incredibly popular with arcade goers and Hockey fans alike. The game focused on the underdog USA Olympic Hockey team of 1980 against the juggernaut Russian Hockey team. Obviously some of the allure of the game played on the emotions of American Hockey fans still proud from America's 1980 Olympic Gold medal Hockey victory.

In 2010 ICE introduced a Deluxe Home version of the game with no coin doors and started offering NHL and AHL licensed team versions. There is also a 30th Anniversary "Miracle on Ice" Edition of the game featuring the classic USA vs CCCP teams licensed through USA Hockey. Licensed games feature team colors and logos with custom hand-painted players in replica jerseys.

Today, the Super Chexx bubble Hockey game is the brand of choice for most bubble Hockey enthusiasts as its standards have never waned from the beginning.

On Chexx/Super Chexx there is always a winner. The game continues play even after game time has run out until a goal is scored (the game is purely mechanical in regards to the players and puck, and can not stop play if the puck is on the ice). If a goal is scored tying the game after the end of the game time (even though by NHL hockey rules the game would be over and the winner declared when time ran out), sudden death is played (this is indicated by the period number flashing on the score board or the ICE lamp cycling left to right). If the game is 'over' (time has run out) and say the score is 2-to-1, and the losing team scores tying the game, the puck is returned to the ice and the game continues. This is sudden death. The reason the game does this is because there is no way to stop a game when time runs out unless a goal is scored and the puck is not kicked out to the ice. The machine wants to ensure there is never a tie.

All Chexx hockey games play the U.S. national anthem (Super Chexx can also play the Canadian anthem) at the beginning of the game (2001 and later games the anthem actually sounds good - earlier games and the singer sounds sick!) There is even a "boo" button to get the crowd to make a "BOOOO" noise (used to eject the puck too), and to abbreviate the national anthem and eject the puck at the beginning of the game.

Though ICE created the first bubble Hockey table, they are not the only company producing dome Hockey tables today. Beginning in the 1990′s, manufacturing companies like the Carrom Company, Regent- Halex, Harvard and Shelti followed suit by producing their own versions of the tables. Sometimes calling the tables ‘stick Hockey’, they manufacture Hockey tables with and without domes. The Stiga company is well-known for their smaller versions, sized for the tabletop. Bubble Hockey as we know it began in 1983 when Innovative Concepts in Entertainment - ICE created the first Chexx Bubble Hockey game. Ralph Coppola and Jack Willert formed the company. 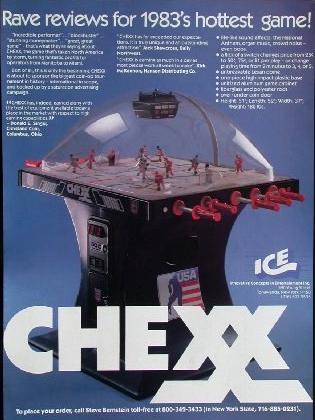 The very first Chexx Hockey table shipped from ICE's suburban Buffalo plant Feb 3, 1983. ICE sold over 5000 Chexx tables in the first year (7000 in the first 18 months). This was quite a feat as the amusement business in 1983 was very much video dominated.

At the time the Buffalo NY company built and sold its games from a shop located in the township of Tonawanda NY, not far from American Wurlitzer's fabled jukebox factory in North Tonawanda.

Chexx Hockey is still in production today in its "Super Chexx" form. Counting all the improvements done on the basic game, (1983 Chexx, 1988 Chexx, 1993 Super Chexx, 2001 Super Chexx), ICE has sold close to 20,000 domed ice Hockey tables. It even made its way into the home sports retail market with a non-coin operated version.

The first Chexx version was blue (well except in Canada which got a red version) and had a long CPU board and was known as "Chexx Hockey". This had the USA (or Canada) versus Russian/USSR Hockey teams, taking advantage of the US/Russian Hockey rivalry of the 1980 olympics. In the 1990s ICE decided to go with a USA versus Canada theme on their new red Super Chexx model.

The Super Chexx version had some improvements over the original Chexx Hockey. The main improvement is time counts for each period and "shots on goal" is tracked in the dome's scoreboard. The original blue game used three "ICE" lights to indicate the period, where the red Super Chexx used an actual LED to count down time in the period. The puck is magnetic, and in front of each goal is a set of reed switches underneath the plastic playfield. As the puck goes over the switches it closes the switches. This gives a "shot on goal" read-out on the score board, and the crowd produces an "OHHHH" noise (the "OHHHH" noise though is present in all versions of Chexx hockey right from 1983). On Super Chexx any time the reed switch in front of the goal is closed, the shot on goal LED increments. If the puck goes into the goal, it rolls down an aluminum rail and passes another magnetic switch. This is what scores the goal and of course the crowd noise responds to the goal. A moment later a solenoid automatically kicks the puck up from under center ice and onto the playing field to continue play (the Boo button can also be pressed anytime to eject the puck manually). The game is timed (adjustable), but will continue to play past the set time until a goal is scored.

Chexx Bubble Hockey game has evolved through out the years from it’s original Chexx version into  Chexx 2, Ultra Chexx and then to  Super Chexx.  The Super Chexx original version was in 1993 and turned into it’s current Super Chexx version in 2001.   The most noticeable upgrade from 1993 to 2001 is the enhanced sound upgrade.

In 2005 ICE produced a limited edition Super Chexx game.  This featured USA versus Canada with a black base.  Today Super Chexx is made with a black, red or white base.Though ICE created the first bubble Hockey table, they are not the only company producing dome hockey tables today. Beginning in the 1990′s, manufacturing companies like the Carrom Company, Regent- Halex, Harvard and Shelti followed suit by producing their own versions of the tables. Sometimes calling the tables ‘stick hockey’, they manufacture Hockey tables with and without domes. The Stiga company is well-known for their smaller versions, sized for the tabletop.