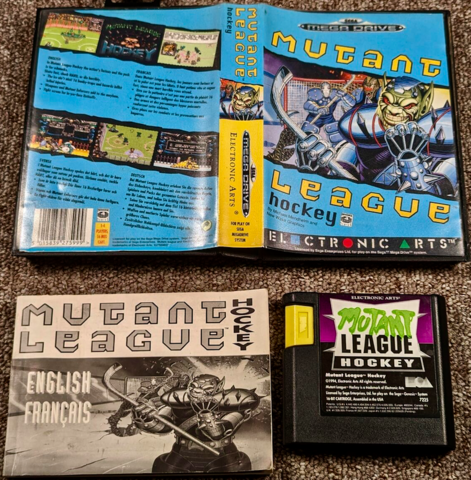 Mutant League Hockey is a video Hockey game that was released in 1994 for the Sega Genesis.

The game has special plays that can cause things to happen like making the puck explode when it is picked up by an opposing player, bribing the referee to call fake penalties against the other team, and land mines and holes on the ice.

Hazards litter the ice and death is commonplace. Players may substitute their goalie for a demon goalie, a gigantic demon head that takes the place of the net; scoring on a demon goal causes it to explode. In addition, the crowd is prone to throwing weapons or other powerups onto the ice; they may be picked up and used freely. When a player dies, their corpse remains on the ice and may be tripped on; between periods, a giant slug acting as an ice resurfacer eats the debris littering the ice. As in real hockey, fights may break out. Fights in Mutant League Hockey are done as a minigame, where the objective is to knockout the opponent. Both players are still sent to the penalty box, but the player who got knocked out also takes an additional penalty for losing.