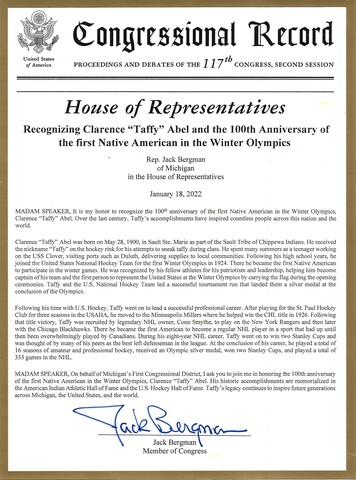 See www.TaffyAbel.com
Taffy Abel - Congressional Record - THE FIRST NATIVE AMERICAN IN NHL (1926 NYR) AND THE WINTER OLYMPICS (1924 FRANCE)
February 4, 2022 marks the Centennial Anniversary of Clarence "Taffy" Abel (1900 -1964) as the first Native American / Indigenous (Sault Chippewa Tribe) in the first ever Winter Olympics in France in 1924. His hometown is Sault Ste Marie, Michigan USA.
Taffy was picked by fellow American Olympians to be the USA Flag Bearer in the 1924 Winter Olympics. As team captain, he then led the US Hockey Team in winning an Olympic Silver Medal in a furiously played game.
On November 16, 1926 Taffy became the first Native American / Indigenous pro hockey player in the NHL when he debuted with the brand-new New York Rangers. In that first game for the Rangers, Taffy helped beat the reigning NHL Champions from Canada. Then in 1928, Taffy helped the Rangers win their first Stanley Cup by beating a tough Canadian Team.
The US Congress has issued an official proclamation attesting to the above facts.
Fred Sasakamoose played briefly with the NHL Chicago Blackhawks in 1953 ... SOME 27 YEARS 'AFTER' Taffy Abel made his debut with the New York Rangers on November 16, 1926.
Hence, Taffy Abel is officially THE FIRST Native American / Indigenous Pro Hockey Player in the NHL.

Sourced from George Jones and Historical Records / US Congress Records.. Credited to US Congress and Rep. Jack Bergman and Nancy Pelosi.