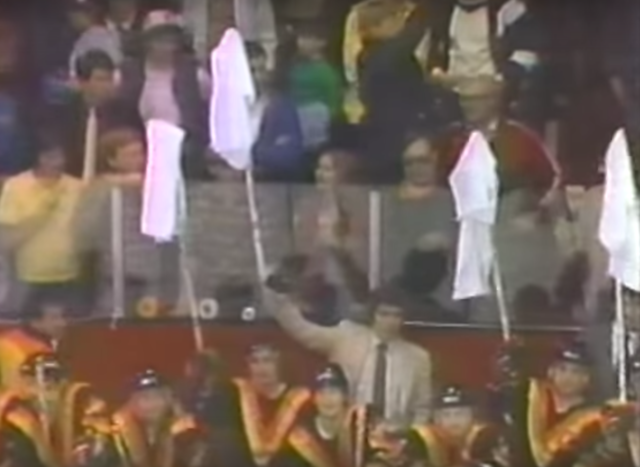 Vancouver won the first game of the series in Chicago 2–1 in double overtime, but fell behind in game two 3–1. During the game the Canucks felt that referee Bob Myers was making questionable calls against them. A series of events in the third period ignited tempers. First, Vancouver had a goal disallowed. Soon after, there was a perceived non-call against Chicago, followed by a fourth consecutive penalty called against the Canucks. Denis Savard scored on the power play to put the Black Hawks up 4–1. This enraged the Canucks' bench. assistant coach Ron Smith yelled out "We give up, we surrender, we give up." Williams suggested to Neilson that he throw sticks onto the ice in protest. Neilson noted that he had done that before, and he had a better idea. He proceeded to take a white towel and place it on the end of a Hockey stick holding it up in a mock surrender; Tiger Williams was first to follow, along with captain Stan Smyl and another Canuck player. Neilson was ejected from the game along with Williams and Smyl.