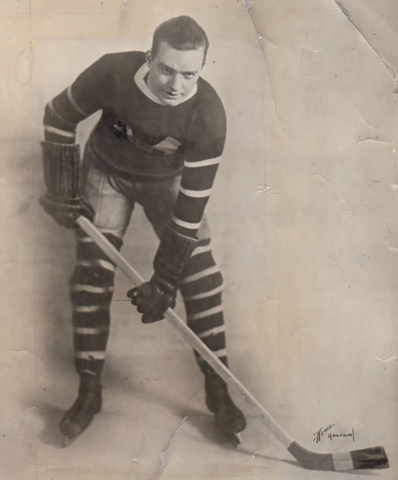 Nicknamed "Old Poison," and with Siebert and veteran stars Clint Benedict, Punch Broadbent and Reg Noble, he would lead the Maroons to the Stanley Cup championship that season. Stewart himself led the league in goal, and point-scoring that year, and become one of the few rookies in history to win the Hart Memorial Trophy as the NHL's Most Valuable Player.

His shot was fast and heavy, and noted to cause a more than a few injuries to the maskless goalies of the era, most notably Lorne Chabot in the 1928 playoffs.

As the Great Depression deepened, though, the Maroons had increasing financial problems — eventually folding in 1938 — and sold Stewart to the Boston Bruins for cash. His glittering play continued for the Bruins, finishing second in team scoring each of his three full seasons with the team, despite being moved back to defence a fair bit.
The Battering Rams. That is what they call this Stewart-Barry-Clapper line. It is the heaviest forward line in professional Hockey. That line averages close to 200 pounds on the hoof. Clapper and Barry eventually refused to play with him because he was too slow.

Played in the first NHL All-Star Game in 1934
Led the playoffs in scoring in 1926 with six goals, three assists and nine points in eight games
Led the league in penalty minutes in 1927 with 133

For a number of years after his retirement he coached the Port Colborne Sailors of the Senior Ontario Hockey Association and St. Catharines.
In 1952 Nels published a book entitled “How to Watch and Enjoy Hockey”.