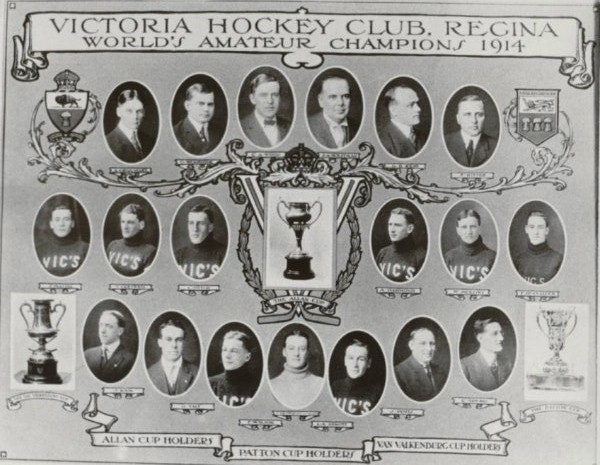 The Winnipeg Monarchs won championship of the Winnipeg league, and were awarded the 1914 Allan Cup. They then defeated defeated Kenora Thistles 6-2 in a challenge cup game.

The Monarchs then played the Regina Victorias in another challenge game, but lost 5-4, and the Allan Cup was awarded to Regina.

Regina successfully defended the Allan Cup against Grande Mere (Quebec champions) on March 16, 6-4 and again on March 18, 4-1 to retain the 1914 Allan Cup championship

NOTE
Edward Lyman Abbott, a right winger on the Victorias, and one of the teams best scorers, enlisted in the army after the season, was sent overseas to fight for Canada in World War 1.

Abbott was awarded the Military Cross, and additional Bars to the Cross, for his courage and leadership during the war. Sadly, Abbott was later killed in battle.

In his memory the Abbott Memorial Cup was created and awarded annually to the Junior “A” Hockey champion for Western Canada from 1919 to 1999.