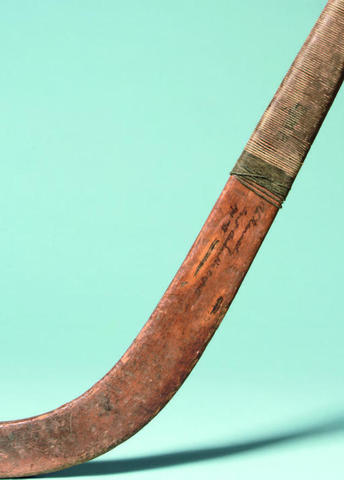 Australasian Antarctic Expedition, 1911-1913 -
Alexander Lorimer Kennedy's 'Referee' Field Hockey Stick by Gamage and Holborn
signed and inscribed 'AL Kennedy Aust Antarctic Expedition 1911-13' on the blade, maker's stamp '20oz GAMAGE HOLBORN REFEREE REGD'
wood, string and rubber
approx. 37in. (94cm.) long - This hockey stick was taken by Kennedy on his trip to the South Pole and used for winter sport - Gamage Holborn were the official suppliers of sporting goods to the Australasian Antarctic Expedition, 1911. Kennedy was at Western Base in 1912 and was a member of several sledging parties, and joined Wild on his main eastern journey as cartographer. Photographs of Kennedy's quarters in the hut at Western Base show the present hockey stick above his bunk