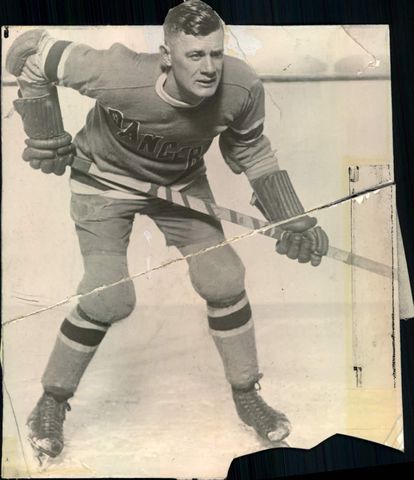 Frederick Joseph "Bun" Cook (September 18, 1904 – March 19, 1988) was a Canadian professional ice hockey forward who played for the New York Rangers and Boston Bruins in the National Hockey League and the Saskatoon Crescents in the Western Canada Hockey League - Cook was part of the Bread Line with his brother Bill Cook and Frank Boucher. The line scored every Ranger goal in the Stanley Cup finals in 1928, leading the team to its first Cup. He won a second Cup in 1933 with the Rangers. He was inducted into the Hockey Hall of Fame in 1995 - After retiring from the NHL in 1937, Cook moved on to the Providence Reds of the International-American Hockey League, which he would coach for six years (while also playing in 37 games). Providence won their first Calder Cup championship in Cook's first year there, 1937–38, and would win again in 1939–40. Following his time in Providence, Cook coached the Cleveland Barons until 1955–56, winning five more Calder Cup championships. His seven championships is by far the most by an AHL coach; no other coach has won more than three - Cook's 636 wins as an AHL coach is also a record - This Photo From 1932