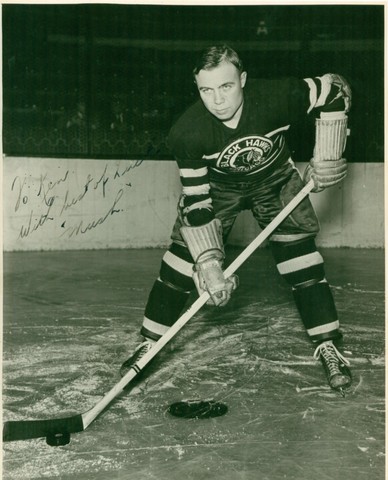 Harold "Mush" March born (18 October 1908 - 9 January 2002) was a Canadian ice hockey player in the National Hockey League. He is most remembered for scoring the game-winning goal in the second overtime of Game Four of the 1934 Stanley Cup Finals to lift the Chicago Black Hawks to a 3-1 series triumph - He became the first recorded player in Ice Hockey history to win the Stanley Cup for his team on an overtime goal - Stanley Cup Champion 1938 - Scored the first goal in the long history of Maple Leaf Gardens on November 12, 1931. On February 13, 1999 as part of the final game played at the Gardens (also between the Maple Leafs and Blackhawks), he officiated at the ceremonial opening faceoff - with the very same puck that he had used to score that first goal, almost 68 years later