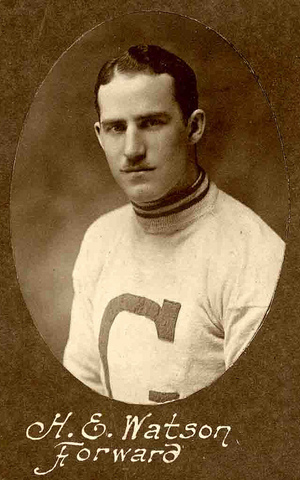 Watson learned to skate and play Hockey on the frozen rivers and ponds, as did many of his neighbourhood friends in St. Johns. Watson moved to Winnipeg, Manitoba with his parents in 1913, continued his Hockey there, and when the family moved to Toronto, Ontario in 1915, Harry signed on to play for the Whitby Athletics of the OHA Jr. and was named a First Team All-Star in 1915. He then moved on to St. Andrews College in the OHA Jr. league. By the 1916-17 season, he was leading the OHA Sr. league with 18 goals while playing eight games with Toronto Aura Lee.

Watson joined the Flying Corps and served overseas during the First World War in the Royal Flying Corps as a fighter ace. He flew a Royal Aircraft Factory SE.5a to victory over an Albatros D.V on 25 January 1918 - By the time he scored his sixth and final win on 4 July, he had destroyed another enemy plane and sent four more down out of control.

After serving for over a year in Europe during World War I, Watson returned to Canada and to Hockey action with the Toronto Dentals of the Ontario Hockey League / OHA Sr. league. He made it back in time for one playoff game against the Hamilton Tigers in which he scored a goal in a losing cause.

Watson was nicknamed "Moose" because of his size and height.

In 1919, the Toronto Granites Hockey team was formed by the eponymous Toronto Granite Club and Watson was to become their star player, and he was named to the OHA Sr. Second All-Star Team in 1920 and made the First Team All-Stars in 1922 and 1923. He was also named as the OHA Sr. most valuable player in 1922 and 1923, as the Granites won back to back Ontario senior Hockey (John Ross Robertson Cup) championships and Allan Cup championships as Canadian champions.

The Toronto Granites were chosen to represent Canada at the 1924 Winter Olympics at Charmonix, France. It was there where Watson enjoyed his greatest athletic achievement and established himself as perhaps the greatest of all Canadian Olympic Hockey performers. Watson scored 37 goals, 9 assists in five games as the Canadian Team outscored the opposition 110-3 over the five games. Watson scored 11 Goals vs Czechoslovakia, 6 Goals vs Sweden, 13 Goals vs Switzerland, 4 Goals vs Great Britain and 3 Goals vs United States of America.

Watson retired as a player after the 1924 season, even after he was offered a contract to play in the then seven-year-old National Hockey League / NHL by Charlie Querrie, manager of the Toronto St. Patricks, who offered Watson $10,000 to join his team for the 1924–25 season, and the Montreal Maroons also offered him a contract for a reported $30,000. He declined both, Watson refused to be “tainted” by the lure of the professional game and paid service. Indeed, Bert McCaffery, Hooley Smith, Dunc Munro, and Beattie Ramsay (former teammates) all played for money, but their leader refused to sign a pro contract, going on to enjoy an extremely successful career in the Ontario insurance field.

Watson is remembered as the finest example of a purely “amateur” Hockey player Canada has ever produced.

Although he ostensibly retired after the Olympics, Watson played sporadically with the Parkdale Canoe Club from 1924 through 1927, two games with the Toronto Marlboros during the 1927-1928 season, and three with the Toronto National Sea Fleas (Toronto Nationals) from 1929 through 1932. He also coached the Toronto National Sea Fleas in 1930-31 and 1931-32 seasons, and also refereed for several OHA games during the 1931 playoffs. In December 1931, during his second season behind the bench for the Sea Fleas, Watson made a brief comeback as a player at the age of 33 after one of his players was unable to make a road trip. In his final year with the Sea Fleas, he coached the team to an Allan Cup championship in 1932.

Harry Watson was inducted into the Hockey Hall of Fame in 1962.

Harry Watson was inducted into the International Ice Hockey Federation / IIHF Hall of Fame in 1998.

Harry Watson is the IIHF’s 53rd most influentially significant story in Hockey's history.