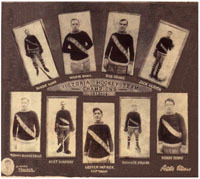 on the site - Victoria Sports hall of fame, there are photos in the artifact section, It is of the YMCA team, with a cup..It is mentioned near the above title, stanley cup withheld.. Some of the players are the same as in the photo of the north ward team, the coach and percy richardson are in both. the two other teams in victoria at that time were victoria champions, and the aristocrats I believe - one would have to check that. sorry no photo of the ymca team (wrong format)

Sourced from Victoria sports hall of fame. Credited to unknown-- it's on the photos ?.

best in all things