Governor General of Canada Lord Stanley on a CPR Train 1889 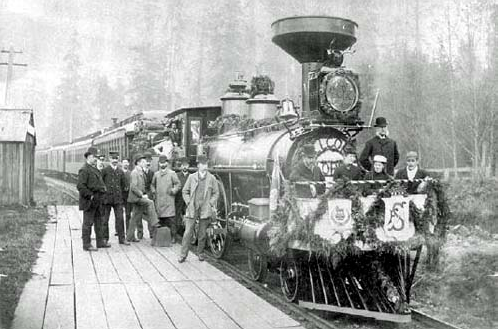 Lord Stanley, 6th Governor General of Canada, and Lady Constance Stanley, along with two guests and a aide, sit at the front of a Canadian Pacific Railway / CPR train.

In 1889 Lord Stanley would be the 1st Governor General to visit Western Canada and the Pacific Coast. The CPR train was modified at the front where the Cowcatcher / Pilot is. A viewing deck / Buffer Beam was installed so Lord Stanley could see as much of Western Canada as possible during his historic trip to the West Coast of Canada.

Lord Stanley was also known to have the train stop at villages and First Nations communities to meet the people of Western Canada.

On October 29, 1889 while in Vancouver, British Columbia, Lord Stanley dedicated Stanley Park (now a National Historic Site of Canada).
An observer at the dedication wrote: "Lord Stanley threw his arms to the heavens, as though embracing within them the whole of one thousand acres of primeval forest" and dedicated it 'to the use and enjoyment of peoples of all colours, creeds, and customs, for all time. I name thee, Stanley Park.

A few days before the dedication, incidentally, a letter was written (we’re not sure by whom) promising a suitable monument to commemorate the event. City archivist J.S. Matthews would discover that letter in 1950, more than 60 years after it was written, and realize the promise had not been fulfilled. He began a fund-raising campaign, and raised enough money to commission a statue. It took a while: the statue—created by English sculptor Sydney Marsh, and capturing Stanley’s expansive gesture wouldn’t be unveiled until May 19, 1960. Fittingly, that ceremony was presided over by another Governor General, Georges Vanier.

His visit to Western Canada in 1889 gave him a lasting appreciation of the region's great natural beauty as well as permitting him to meet the people of Canada's First Nations and many western ranchers and farmers. He also experienced the joys of fishing and avidly pursued the sport whenever his busy schedule allowed.