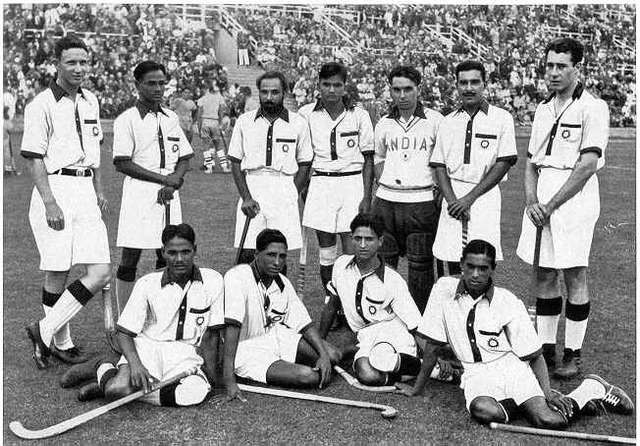 Summer Olympic Field Hockey Champions - India - 1936 - British Indian Empire - Indian Empire.
On the morning of the final, the entire team was nervous since they had been defeated the last time they had faced Germany. In the locker room, Pankaj Gupta produced a Congress tricolour. Reverently the team saluted it, prayed and marched onto the field. A crowd of 40,000 that included the Maharaja of Baroda and a large number of Indians who had travelled from all over the Continent and England had turned out to see the final battle. The audience included Adolf Hitler, and top Nazi officials like Hermann Goering, Joseph Goebells, Joachim Ribbentrop and others. The game was packed with thrilling incidents, the final had the vast crowd at the edge of their seats. The Germans undercut and lifted the ball in a game played at a very fast pace. Twice India's Dara tried to score but was off-side on both occasions. Germany had been successful at stopping the Indian forwards and it was becoming very difficult for the Indians to score.

It was clear that the first goal scored would be important. In the 32nd minute, Roop Singh scored from a difficult angle after getting a pass from Jafar. This was the only goal India scored till half-time.

During the break, Dhyan Chand huddled his team together and congratulated them on their play so far. He cautioned them that the one goal lead was very small, and that Germany could equalise anytime.

The Indian team got into their rhythm in the second half. Dhyan Chand scored in the opening minutes of the half. India then scored a barrage of goals - four in five minutes to seal the fate of the match.

Roop Singh had an interesting observation on this stage of the match, "Dhyan Chand, a supremely unselfish artist who never held on to the ball for even a second more than necessary, was seen in a rare selfish mode. He shouted to us - direct all passes to me, I will take care from there on."

As the ground was still slippery due to the rain, Dhyan Chand discarded his spiked shoes and stockings and played with his bare feet and rubber soles. It was the incredible stickwork of Dhyan Chand that had the crowd gasping. The way he moved with the ball, as if it was stuck to his hockey stick, puzzled all those who were present.

A newspaper described Dhyan Chand's game as "a flick of the wrist, a quick glance of his eyes, a sharp turn and then another turn, and Dhyan Chand was through."

After India had scored four goals, Germany finally opened its account off a rebound from goalkeeper Richard Allen. This was the first goal conceded by India in the Olympic tournament. It would be the only goal they would concede.

After the sixth goal scored by India, the Germans decided to go after the Indian captain. The German players started to play aggressively and go for rough tackles on Dhyan Chand. The German goalkeeper even broke one of Dhyan Chand's teeth in a clash.

After receiving first aid, Dhyan Chand came back to the field and instructed his team not to score any more goals. "We must teach them a lesson in ball control," he told his team.

The Indian team would take the ball to the German 'D', then back pass among themselves, then take it again to the goalmouth but not score. This strategy baffled the Germans. Dara and Dhyan Chand rounded off the tally in the last few minutes of the game to make the final score India 8 - Germany 1.