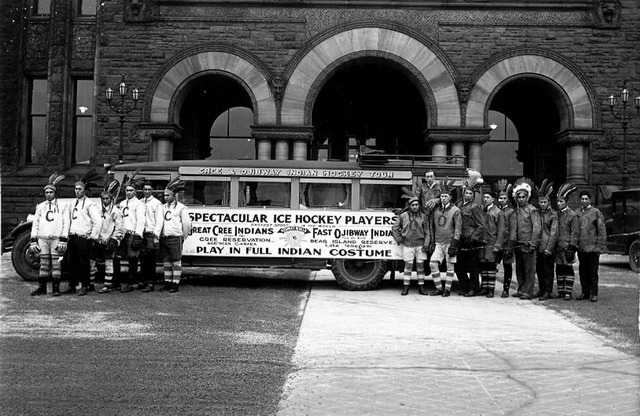 A 2,200-mile motor coach tour. Over the course of 60 days, the two teams would travel to over a dozen Ontario and American cities, playing exhibitions against each other or local teams.

The “Cree & Ojibway Indian Hockey Tour,” as it was billed on the side of the bus, featured the “Fast Ojibway Indians” versus the “Great Cree Indians.” One team was composed of Ojibway players from Bear Island in Lake Temagami—now known as Teme-Augama Anishnabai or Temagami First Nation. The other was composed of Cree players from Chapleau (according to one newspaper) or “the James Bay territory” (according to another). Papers weren’t concerned with such precision. It seems likely that the Cree team was drawn from Bear Island as well as Chapleau Cree First Nation, and possibly even Moose Factory or elsewhere.