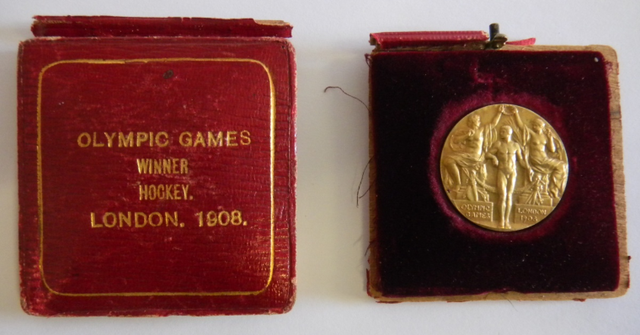 Gerald Logan (b. 29 December 1879) played hockey for England at the London 1908 Olympic Games, scoring 3 goals in England's 8 - 1 win over Ireland in the Final. His Gold medal has been loaned to The National Hockey Museum by his great nephew, Nigel Bates.

The Gold medal was left to Nigel by Gerald Logan's wife, Alix, in her will as he was the only member of the family that played hockey.

The Medal was brought to the National Hockey Museum (NHM) today by Nigel's parents and the Museum were able to show them the Team sheets of Gerald Logan's 9 appearances for England between 1906 and 1909. Gerald played for South, Surrey and Hampstead Hockey Club. NHM presented Mr & Mrs Bates a Team Photo of England Team of 1906 taken before England v Scotland match.
(INFO by By Dil Bahra)