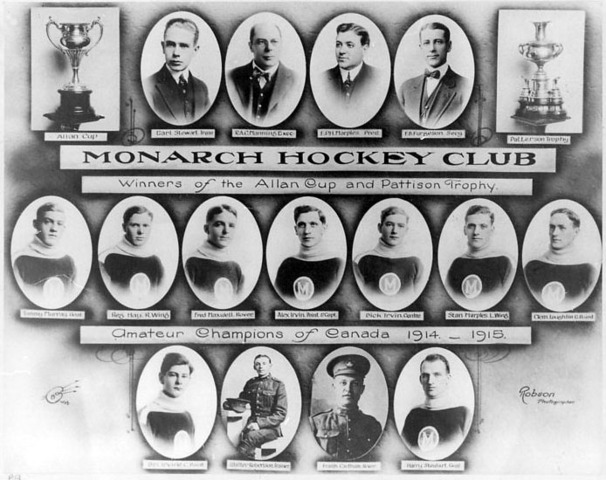 After winning the league championship in 1914, the Monarchs defeated Kenora on March 11th, 6-2, but lost out to the Regina Victorias on March 13th, 5-4.

The Monarchs won the Pattinson Trophy (Winnipeg League) for the 1914-15 season, defeating both Fort William and Edmonton in the playoffs.

The Melville Millionaires won the Saskatchewan championship and the right to defend the Allan Cup. They defeated the Toronto Victorias in a 2 game series.

On March 10th, the Monarchs defeated Melville 4-2 to claim the 1915 Allan Cup championship. As would be the case for the generation affected by World War I, service teams supplied most of the senior Hockey of the day.

The Monarchs’ team photo shows both Walter Robertson and Frank Cadham in their military uniforms.