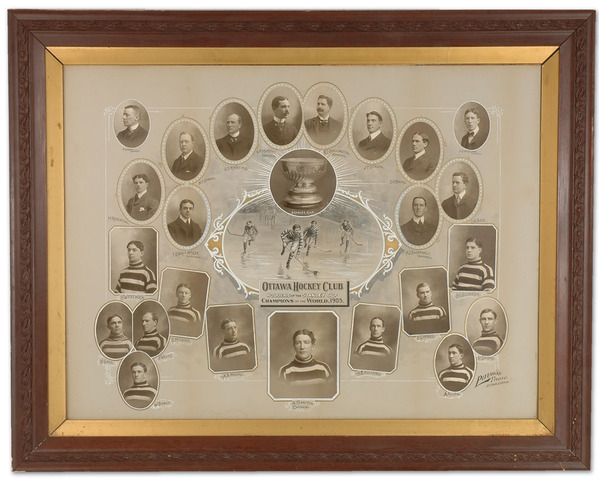 Ottawa Hockey Club - Ottawa Senators - Silver Seven -1905 - Stanley Cup Champions - The first "dynasty" of the Ottawa Hockey Club was from 1903 until 1906, when the team was known as the "Silver Seven". The era started with the arrival of Frank McGee for the 1903 season and ended with his retirement after the 1906 season. Having lost an eye in local amateur hockey, he was persuaded, despite the threat of permanent blindness, to join the Senators. The youngest player on the team and standing 5 foot 6 inches tall, he went on to score 135 goals in 45 games. In a 1905 challenge against the Dawson City, he scored 14 goals in a 23–2 win. He retired in 1906 at the age of 23.
In the 1903 CAHL season, Ottawa and the Montreal Victorias both finished in first place with 6–2 records. The top scorers were the Victorias' Russell Bowie, who scored seven goals in one game and six in another, and McGee, whose top performance saw him score five goals in a game. The two clubs faced off in a two-game total goals series to decide the league championship and Stanley Cup. The first game, played in Montreal on slushy ice that made it a desperate struggle to score, ended 1–1. The return match in Ottawa, witnessed by three thousand fans, was on ice coated with an inch of water. The conditions did not hinder Ottawa, as they won 8–0, with McGee scoring three goals and the other five shared among the three Gilmour brothers, Dave (3), Suddy (1) and Bill (1), to win their first Cup. This started a period in which the team held the Stanley Cup and defeated all challengers until March 1906.
For that Stanley Cup win, each of the team's players was given a silver nugget by team executive Bob Shillington, an Ottawa druggist and mining investor. He gave them nuggets instead of money since the players were still technically amateurs and to give them money would have meant disqualification from the league. In a 1957 interview, Harry Westwick recalled that at the presentation "One of the players said 'We ought to call ourselves the Silver Seven.' and the name caught on right there." (At the time, hockey teams iced seven men—a goaltender, three forwards, two defencemen and a rover).
The Silver Seven moved between three leagues during this time, and for a time were independent of any league. In February 1904, during the CAHL season, Ottawa resigned from the league in a dispute over the replaying of a game. The team had arrived late for a game in Montreal and the game had been called at midnight, with a tied score. The league demanded that the game be replayed. The club agreed to play only if the game mattered in the standings. The impasse led to Ottawa leaving the league. For the rest of that winter, the club played only in Cup challenge series. Quebec went on to win the championship of the league and demanded the Stanley Cup, but the Cup's trustees ruled that Ottawa still retained it. The trustees offered to arrange a challenge between Ottawa and the CAHL champion, but the CAHL refused to consider it. The next season, Ottawa joined the Federal Amateur Hockey League (FAHL), winning the league championship. The club was only in the FAHL for one season, and the Montreal Wanderers became their new rival. For the 1906 season Ottawa, along with the Wanderers and several of the CAHL teams, formed the Eastern Canada Amateur Hockey Association (ECAHA), unifying the top teams into one league.