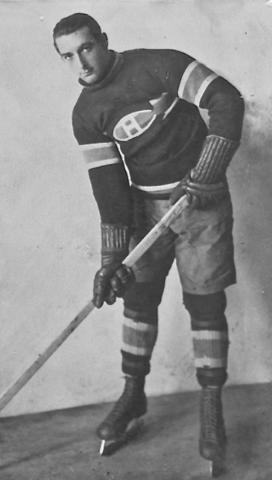 Larochelle signed as a free agent with the Montreal Canadiens, November 23, 1925, and played 33 games as a rookie, scoring 2 goals, 1 assist. His 1st NHL goal was scored on March 11, 1926 vs John Ross Roach of the Toronto St. Patricks.

Tough and strong despite carrying less than 160 pounds on his 5-foot-8 frame, Larochelle missed very few games in his second stint with the Canadiens, successfully holding his own against bigger, heavier opponents.

In the 1931 NHL playoffs, Montreal played Boston in a best of 5 series that went the distance. Game 5 played at Le Forum de Montréal went into overtime, and it was Larochelle who scored the winner on Boston goalie Tiny Thompson. It was his only goal of the playoffs, and he was treated like a hero by his teammates and fans. Montreal went on to defeat Chicago to win the 1931 Stanley Cup championship.