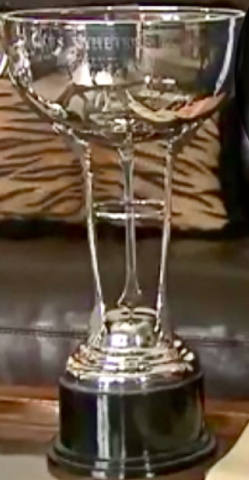 NOTE - This is a small version of the original Ahearne Cup that the Castors won, and given to players/management of the team.

The original Ahearne Cup was held in Sweden annually from 1952 to 1977 (no tournament played in 1957), with the finals at Johanneshovs Isstadion in Stockholm, and co-arranged by newspaper Dagens Nyheter. It was held in December and open to both club teams and national teams, although national teams seldom competed. While most teams were from Sweden, many teams from the United Kingdom, the Soviet Union, Czechoslovakia, Canada and Finland also competed. The record for most tournaments attended is shared between Swedish teams Södertälje SK and Djurgårdens IF, both with 20 entries, followed by Leksands IF and AIK with 12 each. Djurgården also has the record for most wins, four, while Harringay Racers and Spartak Moscow won the tournament three times each.