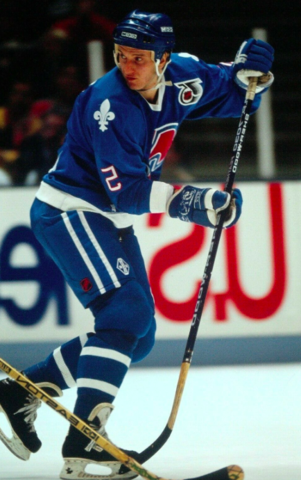 Gusarov then joined the senior CSKA Moscow, also known as the Red Army Team, as they represented the Soviet Union in International competition.

Gusarov also played in the 1987 Canada Cup, where the Soviet Union team played Canada in the 3 game final. Game 2 on September 13, 1987 is considered by many, as the Greatest Hockey Game ever played. Gusarov had 1 goal, 1 assist in 6 games played during the tournament.

Gusarov was drafted by the NHL Quebec Nordiques in 1988, and later joined the Nordiques, playing his 1st game on December 15, 1990, scoring 1 assist. He scored his 1st NHL goal on Jean Claude Bergeron of the Montreal Canadiens, February 7, 1991.

Gusarov played for the Nordiques for 5 seasons, who then became the Colorado Avalanche for the 1995-96 NHL season. Gusarov helped the Avalanche win the 1996 Stanley Cup championship with 9 assists during their playoff run.

Gusarov played 9 full seasons for the franchise, and finished his NHL career during the 2000-01 season, playing for 3 teams - Avalanche, New York Rangers and the St. Louis Blues.

Gusarov is a member of the Triple Gold Club, having won the Olympic gold medal in 1988, the 1989 IIHF World Championship and the 1996 Stanley Cup championship.

Gusarov was known for being a strong skater with a long reach, and was a offensive defenseman for the Red Army. He wasn’t a prolific scorer - not in the modern sense. However, he could score in a few goals and assist on a few others. When he came to the NHL, though, he changed his playing style completely to a skilled shutdown defenseman.

Alexei Gusarov was awarded the Honoured Master of Sports of the USSR in 1988, later it would be changed to being inducted into the Russian and Soviet Hockey Hall of Fame in 1988.