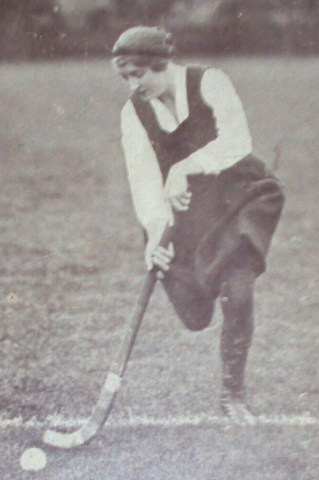 Lidderdale played her early Hockey at the East Glos Club, then at age 15 stared for the local county team in Gloucestershire.

Lidderdale made the England Woman's National Hockey Team at age 16 in 1910.

In 1919 she scored all nine goals against Ireland and all six against Scotland during international games.

Lidderdale played at centre forward and was considered the best female player in that position during her later career.

Lidderdale was a member of the All-English Girls Team that was the 1st British Hockey team to play in the USA, touring there in the fall of 1921. Lidderdale scored 9 goals vs the All-Philadelphia Team on October 20, 1921 in a 16-1 victory.

In 1923 she was made captain of the England women's national field Hockey team.

K.E. Lidderdale also released a book in 1923 called "Hockey for Girls and Women" published by G Bell and Sons.