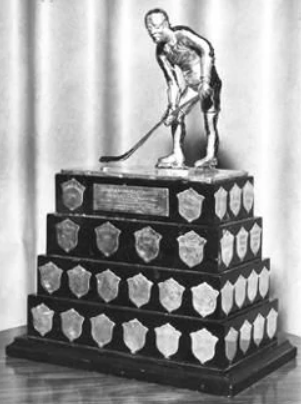 The Herder Trophy was the brainchild of Ralph Herder, then president of The Evening Telegram, as a memorial to his five late brothers, Arthur, William, Douglas, Augustus and Hubert, who were all avid Hockey players in St. John's, Newfoundland and Labrador.

The trophy was donated in 1935 by the Evening Telegram newspaper and was to be awarded to Newfoundland's best ice Hockey team. The Evening Telegram was published by a member of the Herder family since the founding of the paper in 1879 up until the retirement of Stephen Herder in 1993. The Telegram has played an integral role in the promotion and sponsorship of the Herder, which continues to this day.

The Herder Memorial Trophy now honors the memory of eight Herders. The “original five” Herders are now joined by Ralph, James and Stephen.

St. Bon’s star Edward "Key" Kennedy (1911-1955) was the model for the Hockey player that stands atop the original trophy. It is well-known that trophy-donor Ralph Herder took a photo of Kennedy, in playing pose, to New York where he had a model made and then had the figure cast in silver.