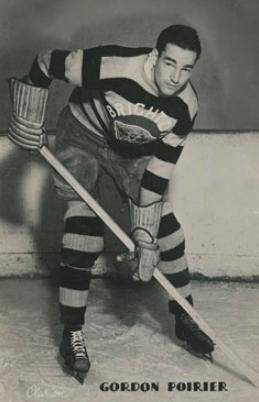 Poirer as a teenager played for the 1931-32 Montreal Columbus team in the Quebec Amateur Hockey Association / QAHA, then played the following season for St. Francois Xavier in the Quebec Junior Hockey League / QJHL.

Poirier did not play during the 1935 and 1936 seasons, instead was the coach of the 1935 Spengler Cup champions Diavoli Rossoneri Milano, and then appointed coach of the Italian National Ice Hockey Team at the 1936 Winter Olympics in Garmisch-Partenkirchen, Germany.

From 1940-41 to 1943-44 Poirier was a member of the Quebec Senior Hockey League having stops with the Ottawa Senators and the Ottawa Commandos while suiting up for ten games with the Ontario Hockey Association Senior 'A' Hockey League's Ottawa Army during the 1942-43 season.

Poirier scored the winning goal for the Ottawa Commandos in the 1943 Allan Cup Championship Final.