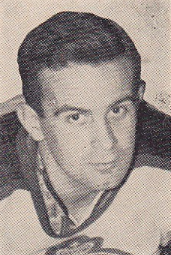 Malone led the Royals to the 1947 Allan Cup Championship, scoring 8 goals, 13 assists in the tournament.