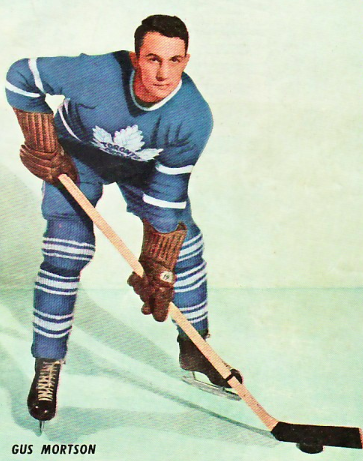 Mortson was sometimes referred to as "Old Hardrock" because of his origins and his style of play.

Mortson played all his early years of Hockey in Northern Ontario and got a taste of big boys Hockey by playing in the Gold Belt Senior Hockey League at age 17. Mortson then signed with the Toronto St. Michael's Majors in 1943. After St. Michael's was eliminated from the playoffs, they loaned Mortson to the Oshawa Generals, where Mortson helped the Generals win the 1944 Memorial Cup championship.

Back with the Toronto St. Michael's Majors for the 1944-45 season, Mortson had a good regular season with the Majors, and really stepped up his game for the playoff run, where he scored 7 goals, 9 assists in 20 playoff games, as the Toronto St. Michael's Majors won the 1945 Memorial Cup championship, and Mortson was now back to back Memorial Cup champion - a rare occurrence.

Mortson then turned professional and played for the Tulsa Oilers in the United States Hockey League / USHL in 1945-46, scoring 19 goals, 29 assists. After one season there, he was promoted to the parent Toronto Maple Leafs, where he was teamed with 19-year-old Jim Thomson, forming a defence duo that became known as the “Gold Dust Twins.” They would be a mainstay on the Toronto defence for the next six seasons. Thomson the stay-at-home defender and Mortson the flashier, whirling rusher who had a nose for trouble and abrasive play.

In the 1948 All Star game, Mortson and Gordie Howe squared off in an All-Star Game and are the only players to fight in an NHL All-Star Game. In 1950, Mortson was named to the league's first all-star team. In total, Mortson played in nine consecutive All-star games, both as a member of the Maple Leafs in their Stanley Cup victory years, and being named to the squad that played the previous spring’s Cup winners.

Mortson was traded to the Chicago Black Hawks by Toronto with Ray Hannigan, Al Rollins and Cal Gardner for goalie Harry Lumley, September 11, 1952. Mortson played for the Black Hawks for six seasons. In 1956–57 he led the league in penalty minutes for the fourth time.

In 1957, Mortson became involved in the aborted formation of a NHL players association with Ted Lindsay, Doug Harvey and others. Conn Smythe was against any union and not happy about Mortson being involved, and the two never saw eye to eye again. During a game in November, 1957, Mortson was in the penalty box and Smythe was sitting behind him, the two would get into a heated discussion, Mortson as Red Burnett reported in the Toronto Star, “executed a snappy military salute and then thumbed his nose at the Gardens head.” Mortson and Smythe apparently met after the game, where Mortson stated “We had a nice friendly conversation: covered 10 years in two minutes.”

Mortson was traded to the Detroit Red Wings by Chicago for future considerations, September 3, 1958, and played in Detroit for his final 36 NHL games. Mortson was then sent down to the minors, playing for the AHL Buffalo Bisons until 1960.

After not playing the 1960-61 season, Mortson spent a year coaching the Dixie Beehives of the Metro Toronto Junior B league. He went back to playing, now in senior Hockey for the Chatham Maroons from 1962 to 1964.

Mortson made a brief return to pro Hockey for three games in 1964-65 when he agreed to help out the Buffalo Bisons who were short on players.

Mortson finished his Hockey career with the Oakville Oaks in OHA Senior A Hockey from 1964 to 1966.