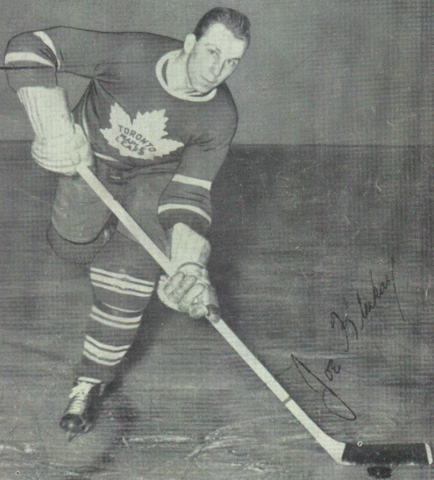 The Toronto Maple Leafs management saw Klukay score 4 goals in 2 playoff games for the Kroehlers in 1943, and asked him to play in one NHL playoff game with Toronto in 1943.

During World War II he served in the Canadian Navy where he continued to play Hockey with the Toronto Navy (1943-44) and Cornwall Navy (1944-45) teams.

After the serving in the War, Klukay signed with the AHL's Pittsburgh Hornets for the 1945-46 season, scoring 26 goals, 23 assists in 57 regular season games, and 4 goals in 6 playoff games.

The Toronto Maple Leafs took notice of his scoring prowess as a first year pro and signed him to contract to join the Maple Leafs to start the 1946-47 season. He and linemate Nick Metz became the league's most effective penalty killing tandem on a team that won through discipline and defence. Led first by Syl Apps and then Teeder Kennedy, Toronto won three consecutive Stanley Cup championships from 1947 to 1949. Klukay also spent some time working alongside talented centre Max Bentley. Klukay and the Maple Leafs also won the Stanley Cup in 1951.

Early in the 1954-55 season, the Bruins were in dire straits and Conn Smythe agreed to send hard hitting defenceman Leo Boivin to Boston in return for Klukay on November 9, 1954. During the last part of the season, Klukay worked with Tod Sloan and George Armstrong. He played 18 games the next year with the Maple Leafs before being sent to the Pittsburgh Hornets of the AHL to finish the season, and his pro Hockey career.

Klukay was soon recruited by George Gee who needed a veteran to play for the senior Windsor Bulldogs. He played several years there starting in the 1956-57 season and won the 1963 Allan Cup championship under coach Harry Watson.