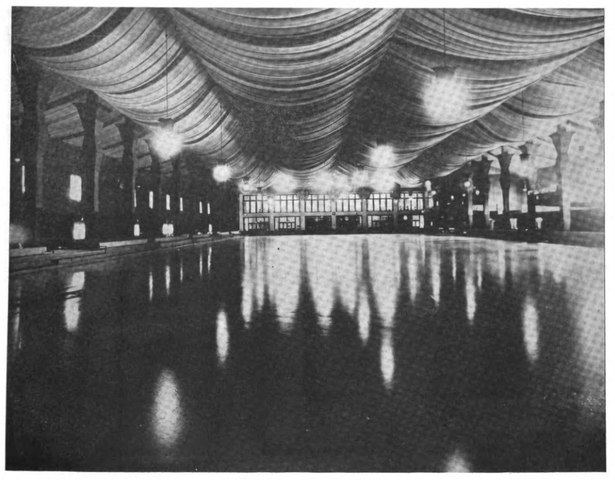 The Chicago Arena was in the city’s Edgewater neighbourhood. It was located at 5917 Broadway, just south of Thorndale Avenue. The building featured a 55-foot ceiling and an ice rink measuring 115 feet by 300 feet. Five thousand people attended the opening of the rink on the evening of 1 March 1917.

The owners reportedly envisioned the arena as the future home of a professional ice hockey franchise. The Tribune offered a somewhat different description of the rink’s ownership. “A combination which controls rinks in Cincinnati and St. Louis is furnishing most of the coin for the rink,” the newspaper reported. “Phil Ball, principal owner of the St. Louis Browns, is one of the heaviest investors. He opened a rink in St. Louis recently and has associated with him men who have been conducting a rink in Cincinnati for years. The backers will combine the chicago, St. Louis, and Cincinnati rinks as a nucleus for a hockey and skating league, and expect to draw in Pittsburgh, Cleveland, and New York, where rinks already are established.”

The Arena’s time as a commercial indoor ice rink was brief. By 1928, the building had been converted into the headquarters of the 202nd Coast Artillery of the Illinois National Guard and eventually came to be known as the Broadway Armory. The building was used for a variety of military activities during the 1950s and 1960s, including recruitment drives and ROTC events. Guardsmen from the Broadway Armory were deployed in 1968 and 1969 to quell urban rioting, and again in 1970 as a show of force against student anti-war demonstrators from nearby Loyola and Northwestern Universities.

The Illinois National Guard remained the building’s primary tenant until the 1980s. With the end of the Cold War, the state of Illinois reduced the scope of the Guard’s operations and ordered the closure of the Armory. After the Guard left in 1996, the state announced its intention to sell the building. Neighborhood residents, however, protested the plan. They feared that the building would be purchased by a developer and replaced by a strip mall. Additionally, the Chicago Park District had begun to offer various sports and leisure programs at the Armory during the 1980s. These programs had proved very popular among residents of the park-starved Edgewater neighborhood. For them, the loss of the Armory to commercial development would have meant the loss of an important recreational facility and community center. During the summer of 1996, area residents successfully convinced the Chicago City Council to pass restrictive zoning legislation intended to make the site less attractive to redevelopers and the state subsequently agreed to transfer ownership of the facility and an adjacent parking lot to the Chicago Park District. Today, the Chicago Arena building is part of the Broadway Armory Park.

Sourced from Ice and Refrigeration, April 1917. Credited to Unknown.